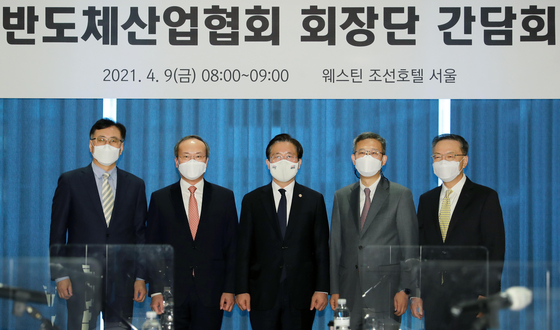 
Executives of Samsung Electronics and SK hynix asked for big tax credits for investments into chip facilities in a meeting with the industry minister.

The meeting, presided over by Minister of Trade, Industry and Energy Sung Yoon-mo, on Friday, was attended by Lee Jung-bae, president at Samsung Electronics overseeing the memory chip business, and SK hynix CEO Lee Seok-hee, along with the members of the Korea Semiconductor Industry Association.

Lee, who also serves as chairman of the association, urged the government to raise the tax credit for investment to 50 percent from the current 3 percent for investments linked with the production and research of chips.

“To stay competitive in the semiconductor industry and to nurture engineering talent, government support is necessary,” Lee said during the meeting.

The minister pledged to come up with “a comprehensive measure” soonn without elaborating.

The gathering came ahead of a highly-anticipated chip summit at the White House set for April 12. Samsung has reportedly been invited.

Either Vice Chairman Kim Ki-nam or President Choi Si-young, who heads the foundry business division, will likely join the meeting, according to the reports.

The group that represents Korea’s semiconductor companies went on to request that the Korean government mediate between the United States and China as the two countries have called for cooperation in supplying chips.

“We demand that [the government] ensure a stable business environment through effective communication with the U.S. and China,” the association said in a statement.

The association also listed a set of requests intended to bolster the semiconductor sector, including a stable supply of industrial water, the development of infrastructure for chip plants and the promotion of semiconductor or software-related majors at colleges in Seoul and nearby metropolitan areas.