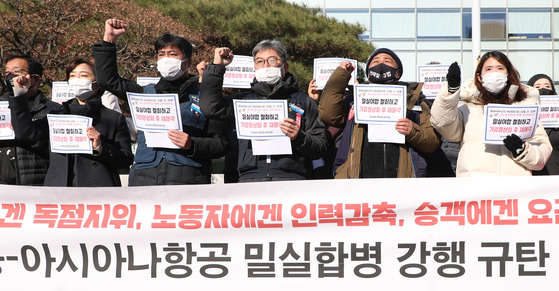 
Labor is skeptical about the no-layoffs promises being made in the complex acquisition of Asiana Airlines by Korean Air Lines, saying that the powers that be need to face reality.


“The government should stop arguing about measures to maintain employment stability that are unrealistic and should rather take part in practical discussions,” a committee representing the unions of the two carriers said in a statement Thursday.

In the complex transaction, Korea Development Bank (KDB) is investing in Hanjin KAL, which will buy shares of Korean Air Lines to help in its acquisition of Asiana Airlines.

On Wednesday, the state-owned bank sent 500 billion won ($457 million) to Hanjin KAL for the purchase of shares, which will be delivered Dec. 22. It also sent 300 billion won to acquire the company’s exchangeable bonds.

The same day, Korean Air Lines President Woo Kee-hong said that no “artificial layoffs” would be needed as the two carriers are made into one, a possibility that was met with skepticism by labor.

KDB and Hanjin KAL Chairman Cho Won-tae have offered similar assurances about the maintenance of head count at what will be an airline with 28,000 workers.

In their statement, the unions also questioned the mechanics and equity of the deal, echoing some of the sentiments already expressed by Korea Corporate Governance Improvement (KCGI), Hanjin KAL’s largest shareholder.

“Hanjin KAL’s capital increase to KDB through third-party allocation was effected yesterday, completely excluding the voices of employees,” the committee said in the statement. “We feel upset about the government’s unilateral acquisition without negotiations [with labor unions].”

“We have repeatedly asked for conference of labor, the companies and the government [to negotiate], but the government and KDB are only concentrating on media reports without offering any response [to the request].”

It added that those responsible need to be held accountable.

“The reason for the injection of public money is because of the immorality and ill management [of Asiana Airlines], but nobody is taking responsibility. KDB, the main creditor, which should inspect [Asiana Airlines], is instead erasing its faults and is rather offering a preferential treatment,” the committee said.

Korean Air Lines plans to seek approval of the acquisition from antitrust authorities in Korea and abroad by Jan. 14.

If the acquisition goes through smoothly, the combined entity is estimated to generate 15 trillion won in annual revenue and become the world’s No. 7 carrier by capacity to transport passengers and cargo, according to 2019 International Air Transport Association numbers.