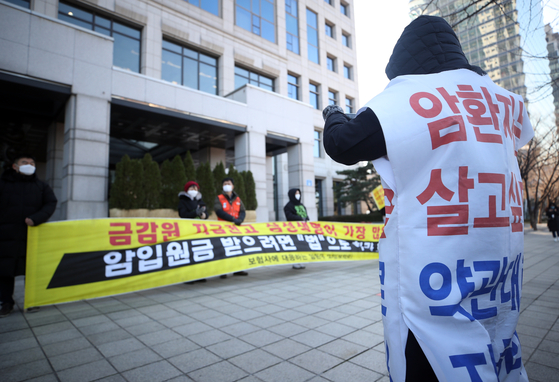 A group of cancer patients who are seeking compensation from insurance companies stage a demonstration in front of the Financial Supervisory Service in Yeouido, western Seoul, on Thursday when the sanction committee meeting on Samsung Life Insurance was held. [YONHAP]

If the warning is approved by the FSS governor and the Financial Services Commission (FSC), Samsung Life Insurance and related companies will be prohibited from starting any new business that needs approval from the authorities.

The FSS and Samsung Life Insurance have been at loggerheads over the compensation of cancer patients who have been treated at nursing hospitals. The financial watchdog claimed the insurer should compensate for the hospital bills, while Samsung Life claims that cost of an extended stay at nursing hospitals cannot be seen directly as cancer treatment.

The dispute went to court as one of the patients filed suit against the insurer for compensation, but the insurance company won the case, with the Supreme Court ruling in September that Samsung Life is not obliged to pay the charges.

The FSS rebutted that the result of an individual case cannot be applied to all cases.

The warning issued Thursday also found the insurer at fault for providing economic benefits to a related company. In 2017, Samsung Life Insurance outsourced the construction of its computer system to its Samsung SDS and said it would ask for financial compensation if the system is not finished in time. When construction was delayed, Samsung Life didn’t receive compensation, according to the FSS.

The insurer owns shares in companies that own shares in Samsung SDS.

The financial regulator ordered a 3-month wage cut to the insurer’s executives and employees.

If the warning is upheld, Samsung Card, in which the insurer holds more than a 70 percent stake, will have to postpone its MyData business, which is considered a key business opportunity for card companies. The FSC had already postponed once the evaluation of Samsung Card's advancement into MyData business last month due to possible sanctions on the parent company.