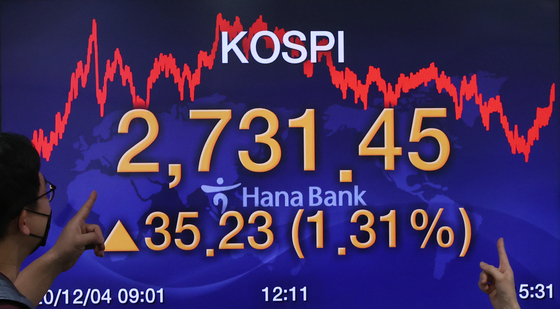 Korea's main index Kospi surpassed the 2,700-level for the first time in history on Friday. It closed at 2,731.45 on Friday, up 1.31 percent from the previous trading day. [YONHAP]


Korea’s main bourse hit another new high on Friday, going above the 2,700 level for the first time in history as foreign investors continued their buying spree, mainly in the semiconductor and internet sectors.

It has been less than two weeks since the country’s benchmark index broke the 2,600 level for the first time on Nov. 23.

The Kospi closed at 2,731.45 Friday, up 35.23 points, or 1.31 percent, from the previous trading day. The index touched 2,740 during intraday trading before retrieving slightly before closing.

SK hynix again posted an all-time high price of 115,000 won per share Friday, up 3.14 percent from the previous trading day.

The so-called untact stocks, one of the beneficiaries of the Covid-19 pandemic as social contact is restricted, experienced a surge on Friday as the number of cases in Korea is showing a rapid uptrend. Vaccine development news recently had been dragging them down.

Korea’s stock market rally is expected to continue for a while longer, although there could be a few adjustments along the way.

“The rapid surge in Korea’s market is apparently showing a trend of overshooting,” said Kim Ji-san, a researcher at Kiwoom Securities. “There could be adjustments to take a break but the uptrend will continue as domestic companies are posting better-than-expected earnings and are also expecting positive momentum next year.”


The weak U.S. dollar is also luring more foreigners to the domestic market.


The value of the Korean won against the greenback again recorded a new 30-month high on Friday, closing at 1082.1 won. That is 14.9 won higher than the previous trading day.

The U.S. dollar has been teetering against major currencies worldwide but the speed of its depreciation against the Korean won has been especially fast.

The financial authority has intervened in the exchange market verbally a few times recently, showing concern that it could have a negative impact on export companies in Korea.

“However, in the short term, it could mean that exporting companies which make transactions in U.S. dollars have to deal with depreciation as well.”