According to Chung, Moon nominated Rep. Jeon Hae-cheol of the ruling Democratic Party (DP) as the interior and safety minister. Kwon Deok-cheol, head of the Korea Health Industry Development Institute, was selected as new minister of health and welfare.

Chung Young-ai, head of the Korea Foundation For Women, was nominated to lead the Ministry of Gender Equality and Family.

The four nominees will face National Assembly confirmation hearings. The hearings, however, are nonbinding.

According to Chung, land minister nominee Byeon is an expert of urban planning and housing supply with experience in academia before joining the state-run housing corporation.

Chung said the Blue House has high expectations that the new land minister will more accurately assess the problems of the housing market, prompting speculation that the administration's policy, largely focused on penalizing owners of multiple homes with steeper taxes, will shift to increasing supply.

Ever since Moon took office, the government has announced 24 sets of real estate cooling measures, but they have done little to curb skyrocketing real estate prices, driving down the approval ratings of Moon and his ruling party. 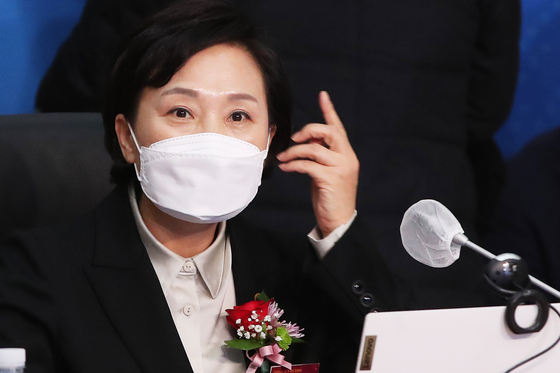 Real estate experts have said the shortage of supply has caused the current situation, and Kim recently fueled public fury by saying, "I would go on making them day and night if apartments were bread."

Chung said Friday that the new land minister will review the effects of the current policy and speed up housing supply.

A senior presidential aide, however, said Moon was not sacking Kim for her failures. "She is one of the inaugural cabinet members, and she has completed her job," he said. "There is a demand for a new policy, so we made the change to accommodate it."

The reshuffle came shortly after Moon's approval rating plummeted to a record low, standing at 37.4 percent, according to the results of a new poll released Thursday. While the latest plunge was mainly attributed to the war between Justice Minister Choo Mi-ae and Prosecutor General Yoon Seok-youl, Moon did not replace Choo in the cabinet reshuffle.

"The people earnestly hoped that Moon replace Justice Minister Cho, Foreign Minister Kang Kyung-wha and Deputy Economic Prime Minister Hong Nam-ki, but they were not changed this time," said Rep. Bae June-young, spokesman of the PPP. "We see no intention from Moon to repair the dysfunctional government. The reshuffle is just a political stunt."