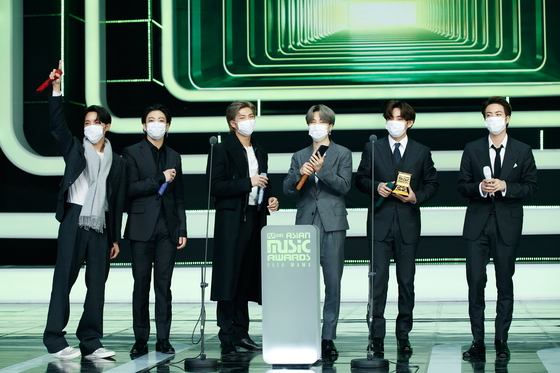 The other four honors the group won include the Worldwide Fans’ Choice award, Best Male Group, Dance Performance Male Group and Best Music Video — the latter two also being for the song "Dynamite."

The award ceremony, organized by entertainment company CJ ENM every year since 1999, was renamed MAMA in 2009 and has become one of the most globally recognizable K-pop events. The events were held in many different cities worldwide to include more K-pop fans for the festivities before, but due to the coronavirus pandemic, they took place solely in Korea this year.

Artists gathered to perform, receive their awards and make speeches without any audience present. The entire event was streamed live online.

BTS member RM said after the group’s “Dynamite” was named as Song of the Year that the group sometimes feels a heavy burden to lift people's spirits as they struggle during the pandemic.

“We are so sorry and thankful that fans accept our message that tomorrow will come again,” he said.

BoA, who is celebrating her 20th year since her debut, received the Worldwide Inspiration Award.