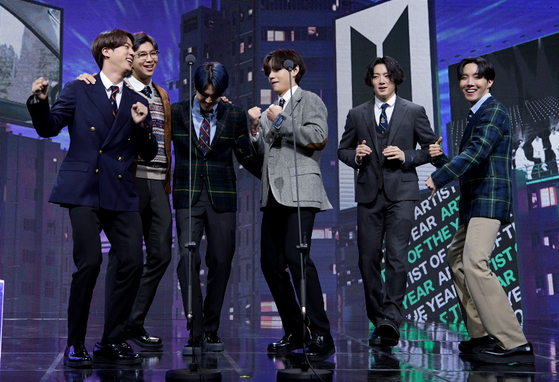 In addition, BTS won the Best Dance (Male) award for “Dynamite” and the Netizen’s Choice award. The band was designated as one of Melon’s Top 10 Artists of 2020 before the ceremony. In all, the septet brought home a total of six prizes.

In addition, the song “eight” by singer-songwriter and actor IU (Lee Ji-eun) won in the Best Rock category, and it was produced by BTS’s Suga, who also performed on the track. IU was also one of the Top 10 Artists of 2020.

In an acceptance speech for the Artist of the Year award, BTS leader RM said, “It has been almost a year since we were able to perform in person with fans...It has been a hard year...But ironically, we realized this year that our efforts to extend our true hearts throughout the world were not a failure. We realized we are connected and our minds are reaching out for each other...through ‘BE’ and ‘Dynamite.’ With your letters and your words, we felt your love.”

Other winners of Melon’s Top 10 Artists of 2020 included three girl bands — Blackpink, IZ*ONE and Oh My Girl — as well as Baekhyun, a member of the boy band Exo, singer-songwriter Baek Ye-rin and rapper and singer-songwriter Zico (Woo Ji-ho). Reflecting the trot boom of the year, two trot singers — Im Young-woong and Kim Ho-joong — also made the Top 10 list.