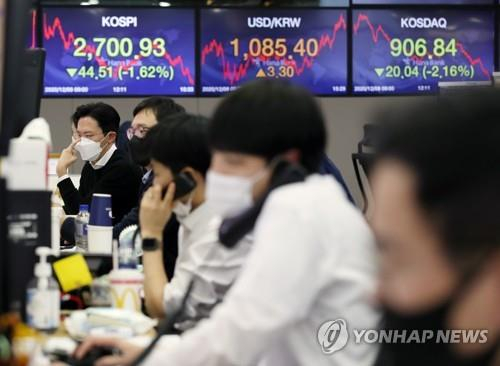 Screens in Hana Bank's trading room in Seoul show the benchmark Kospi closing at 2,700.93 on Tuesday, down 44.51 points or 1.62 percent, from the previous session. [YONHAP]

Stocks tumbled by more than 1.6 percent on Tuesday, putting an end to a five-session winning streak on renewed concerns about the coronavirus. The Korean won fell against the U.S. dollar for the first time in six trading days.
The benchmark Kospi fell 44.51 points, or 1.62 percent, to close at 2,700.93.

The Kospi started weak after hitting an all-time high the previous day.

“The local stock market seems to have been put under selling pressure amid a resurgence in virus cases,” said Lee Won, a researcher at Bookook Securities.

He added foreign selling increased ahead of the simultaneous expiration of stock future and options set for Thursday.

Korea’s tech-heavy Kosdaq index fell 20.04 points, or 2.16 percent, to close at 906.84. Uncertainties regarding coronavirus vaccines led foreign and institution investors to sell pharmaceutical shares, according to a brief on the local stock market provided by the Korea Exchange Tuesday.

The local currency closed at 1,085.4 won against the U.S. dollar, down 3.3 won from the previous session’s close.

Bond prices, which move inversely to yields, closed higher. The yield on three-year Treasuries fell 0.2 basis points to 0.959 percent, and the return on the benchmark five-year government bond dropped 0.8 basis points to 1.311 percent.

'Boxpi' trend leads to surge in profit-taking from stock selling