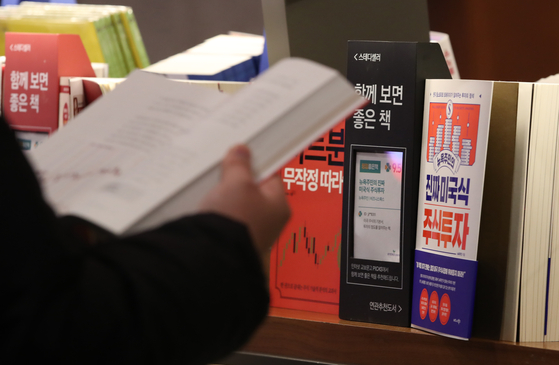 A retail investor reads a stock investment-related book at a big bookstore in downtown Seoul on Jan. 19. [YONHAP]


A 41-year-old skincare specialist who started investing in stocks early last year lost millions of won after she joined an online paid chat room that claims to provide exclusive information on the stock market.

She began with 5 million won ($4,460) in January last year, and invested in hydrogen-related stocks. Her gains exceeded 200 percent in July, and her 5 million won of seed money became 50 million won in a trice.

But then she started losing. Unemployed due to the pandemic, she joined a chat room that offers stock tips after seeing it promoted on YouTube.

In February, she bought a one-year subscription to Stock Leading Room, a chat room that is said to be operated by competent stock analysts.

The woman paid 5 million won for the subscription and bought shares according to the advice offered. In a month, she was down 10 million won.

Korean retail investors have been on a Korean stock buying spree since the coronavirus-induced downturn began, and many of the punters are losing money after paying for advice from supposed pros.

A total of 905 claims for damages were filed in 2018, according to Financial Supervisory Service. The number surged to 1,744 in 2020, and a total of 573 cases were reported so far this year.

The strategies used by the advisors are refined and highly targeted.

The skincare specialist first found out about the chat room in December via a YouTube channel.

"Anyone who wishes to receive specific information about when to buy the shares, please text the number below," the host said.

After a month of consideration, the woman sent a text message to the number and said she is interested. The tipster would send her a message twice a day: one at 6 p.m. offering a tip and another the next morning at 10 a.m. gloating about the stock's rise.

After receiving those text messages for about a month, the woman joined the chat room.

"As the prices of shares that the informant recommended rose the next morning, I thought exclusive information that retail investors cannot know really exists in the chat room," she said. "But later I found out that the advisors just make recommendations of some shares that have increased in price during after-hours trading."

Some stocks experience price bumps in the after-hours market, which is open from 4 to 6 p.m., when positive news or earnings result are released after the closing bell.

Some texts  included other people's stock trading accounts that show high gains. But those were exaggerated numbers that were mocked up with Photoshop, according to the woman.

The woman first hesitated to pay the 5 million won for the membership, which the advisors said was a sharply discounted price. But she was convinced by the advisors as they said they are legal business registered with Financial Supervisory Service and sent her a website link.

"I first doubted, but ended up registering it after I confirmed that the website address was actually valid," said the woman.

They can run the business after simply filing a document. There are no qualifications, and no minimum capital is required.

The woman was consulted via a phone call. She received a contract that included polices for refunds through KakaoTalk message.

After signing the contract, she received information what they claimed to be "exclusive" through individual KakaoTalk message. The informants said they acquired crucial information about certain shares in advance and suggested the woman purchase two stocks for long-term investment and additional four for short-term investment.

For short term investments, she had to watch her KakaoTalk and sell when the advice came through. She complained, but the company blamed her for not being attentive enough.

She purchased 20 million won of certain stock and lost some 7 million won in only about 10 days.

"Some retail investors once reported big losses as scammers recommended items that were at risk of delisting," said Chung Min-kyu of Fides Law.

According to the woman, the company threatened her by saying, "Reckless withdrawal requests can be considered a crime of obstruction business," and they can "file suit against her for compensation."

The company ended up agreeing to give a full refund after she said she would file complaints with Financial Supervisory Service and Korea Consumer Agency.

"In case of cash or lump-sum payment, people have to file suit to get the refund unless the company agrees to give a refund," said Jang Maeng-won, head of Finance and Insurance Team at Korea Consumer Agency.

The advisors continue to actively recruit retail investors via various channels such as social media and YouTube.

"I'm so angry that those companies are still operating their business when so many people are suffering," the woman said. "As the number of cases are growing constantly, the government should impose stricter policies."