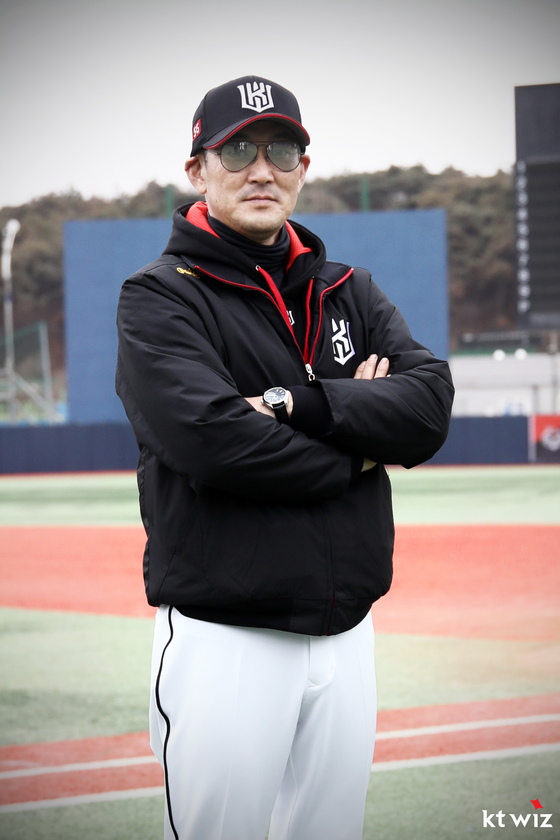 
Former LG Twins’ star Seo Yong-bin is back on the baseball field, this time as the KT Wiz’s Futures League team manager.

Seo was appointed as manager last month and will be in charge of the Futures League team, an important job for a young club like the Wiz that needs to work on developing players.

“[New managers are] young and bright,” said the Wiz’s general manager Lee Soong-yong. “Since he is outstanding in putting together the players, I thought he would be the perfect person to brighten up the Futures League team’s atmosphere.”

Seo's appointment appears to be part of the Wiz’s long-term plan to strengthen the depth of the young players, following the team's successful 2020 season. For the first time in the Wiz’s short history, the club managed to finish second in the 2020 regular season standing and advanced to the postseason, also for the first time.

As the majority of the Wiz squad were experiencing the postseason for the first time in their careers, they faced an early exit after losing to the Doosan Bears in the second round of the playoff.

Looking at Seo’s career, he is likely to help the young players prepare for their next postseason appearance as he used to be a star player back when he played in the KBO.

After Seo ended his career as a pro baseball player he continued to work in the baseball industry as a coach from 2008 to 2011 before leaving the field to be a commentator.

He’s quickly made his comeback, this time as the Wiz’s Futures League manager. Seo hopes to create a team where the young players can rely less on the numbers and let them set and achieve their long-term goals.

Below are edited excerpts from an interview with Seo.


Q. Can you tell us about how you ended up accepting your new job as the Wiz’s Futures League team manager?

A. I got an offer from the club. KT’s direction moving forward and my perspective on players were heading toward the right direction. So I thought we could see some great results if I worked with them. When I thought of this as a new challenge, I also got really excited.


Q. For a while, you were a commentator. What was the experience like?

A. I won’t say the obvious answer of “I got a broader view [of the game],” but as I prepared for the broadcast, I worked hard to improve on delivering my message. I think this will help when I coach players. I had more time to look over myself than back when I was out on the field. By studying in grad school [at Korea National Sports University] I also got to make improvements to myself.


Q. Throughout the 2020 season, KT really jumped forward. With their successful season, there’s higher expectations for the club’s development of young players. As the Futures League manager, you are expected to play a big part in developing young players. How do you feel about that?

A. Once we have a great plan and continue operating the team according to it, I believe that it’ll lead us to a good result. It’s not a challenge if we can meet expectations. I don’t think the future is predicted, so I won’t rely on the results.


Q. How do you plan on organizing the team?

A. I would say passion is the basic requirement. Along with that, personality is important. I’ll work hard to help them adjust to the right routine in their daily lives. They need to get in the habit of performing at their best through their daily routine before and after the game and even after they come back from vacation.


Q. Can you explain that in more detail?

A. Setting a goal is important. Rather than focusing on a goal that’s right in front of them, I’ll provide an environment where they can come up with short-, mid- and long-term plans and work toward that. They can’t just have a goal of increasing their ball speed or increasing their ball spin rate. They need to learn that doing this allows them to get one step closer [to their goal]. I’ll come up with an environment where they can put more meaning into the process.


Q. Back when you played in the KBO, you were a star player. Just having you as a manager can be an inspiration to the young Wiz players. How do you feel about the title “star player?”

A. I’m somewhat aware of what kind of vibe I give to others based on who I am externally. Well, first things first, I’m a very humorous person.


Q. Does that mean you’re confident in communicating with the players?

A. Leaders need to take the right direction. There are people with a strong personality while there are flexible people. But one things for sure is that your personality and character can’t stand out too much. There are times when I need to be strong and times when I need to be flexible. If a leader can’t balance that out, then no matter how good his knowledge is, he won’t be able to lead his staff. I’ll work hard to keep the balance.


Q. You’ll also be in charge of organizing the pitching. Will this be an opportunity for you?

A. I communicate a lot with our pitching coach, and by commentating, I learned about it a little. I’m just at a level where I’m aware of the trends. I think we need more aggressive pitching. They are giving up way too many walks. Rather than improving their skills, there are Futures League players who focus too much on their numbers.

I won’t criticize them if our pitcher gives away a home run after two strikes. Of course I would have to tell them about their mistakes regarding their misunderstanding of the situation. But in terms of their direction, I’ll compliment them.


Q. Is there anything you want to tell KT’s Futures League players or the coaching staff?

A. I want to tell them not to blame the environment. All the other players are playing baseball within this difficult environment due to the situation we are in. We have to prepare for the best within the given situation.