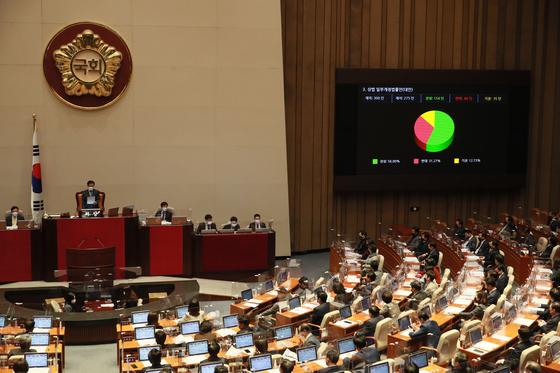 
The Democratic Party, with its clear legislative majority, pushed through three bills that significantly amend existing laws, to the consternation of the business community.

They came in just under the wire, passing just a day before the end of the regular session.

The bill that amends the Commercial Act was the first to pass on the National Assembly's main floor on Wednesday.

“I was shocked at the thought at how economic legislation could be so political,” said Park Yong-maan, head of the Korea Chamber of Commerce and Industry (KCCI), during a press briefing held on Tuesday. “I wonder why they even held a public hearing?”

“I was very surprised at how [the DP] swiftly passed bills that have a major impact on businesses and on the economy on the same platform as political legislation [such as the Corruption Investigation Office],” Park added.

On Tuesday, the DP on its own passed the three so-called fair economic reform bills in standing committees, the final stage before being voted on the main floor. The bills deal with the Commercial Act, the Fair Trade Act and the Financial Group Supervision Act.

The most controversial is the 3 percent rule added to the Commercial Act, which limits the voting rights of the largest shareholders in a company when an auditor is being selected.

Under the current law, the auditor of the company is selected by the board and approved by the shareholders. Some argue that the auditor lacks independence as they need the support of the largest shareholders.

Under the new rule, the largest shareholder will be limited to 3 percent of the total votes regardless of their stake in the company.

The ruling party did make one major compromise, applying the 3 percent rule separately to the largest shareholder and related parties rather than collectively. They are now each limited to a 3 percent vote instead of being capped to that level as a group.

A reform to the Commercial Act allows a minority shareholder of a company to sue board members of a subsidiary. The current law only allows the shareholders to sue the company in which they have a stake.

In the case of the Fair Trade Act, only some of the amendments passed. One is related to the strengthening of regulations that penalize companies for illegal transactions with related companies.

Under the current rule, listed companies where the founding family owns more than 30 percent, and in the case of unlisted companies 20 percent, are monitored by the Fair Trade Commission (FTC) from excessive internal transactions.

The regulation is set up to prevent these families from profiting by having companies sign sweetheart deals with companies in which they own a large stake or all the shares, thus extracting value from the enterprise and harming the interests of shareholders.

Such practices also harm the interests of smaller companies, which might otherwise be able to win contracts for the business.

The amendment takes the threshold to 20 percent for all companies, listed or unlisted.

Until now, companies such as Hyundai Glovis were able to avoid the FTC’s scrutiny by coming in just below the 30 percent line.

At the last minute, the DP decided to keep the authority to turn these cases over to the prosecution exclusively with the FTC. Had this monopoly been lifted, small companies, local governments and civic groups would have been able to refer cases for criminal prosecution.

A Financial Group Supervision Act amendment passed the standing committee, increasing the accountability of financial groups by forcing them to create risk-management policies. It also requires financial groups with assets of more than 5 trillion won ($4.6 billion) to turn in management improvement plans to the financial authorities.

The business community strongly objects to the 3 percent rule, which it claims cannot be found anywhere else in the world. It also exposes Korean companies to hostile attacks from hedge funds and speculative investors, they claim.

“No other place in the world limits the voting rights of the board members,” said Kwon Tae-shin, Federation of Korea Industries vice chairman. “The 3 percent rule is an unconstitutional regulation that shakes the very foundation of capitalism.”