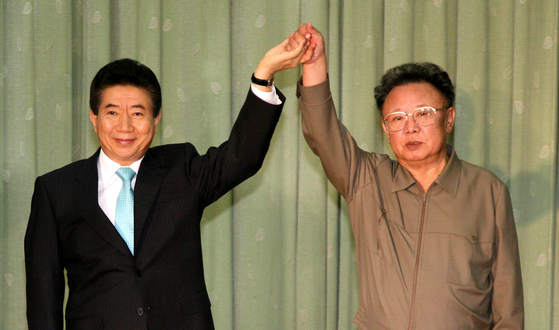 The Supreme Court on Thursday overturned an acquittal of two former aides to the late President Roh Moo-hyun charged with deleting transcripts of the 2007 inter-Korean summit, sending back the case to a lower court for retrial.

The highest court’s decision places Baek Jong-cheon, who served as Roh’s chief national security adviser, and Cho Myoung-gyon, who was Roh’s secretary for national security policy, back on track for a possible conviction, nearly seven years after conservative lawmakers filed a criminal complaint against them.

Cho also served as President Moon Jae-in’s unification minister for two years, beginning in mid-2017. Moon was Roh’s chief of staff when the 2007 inter-Korean summit between Roh and then North Korean leader Kim Jong-il was held, and was the head of the committee that prepared the historical meeting.

Moon was among several people in Roh’s Blue House who were grilled by prosecutors about the summit transcripts. But prosecutors ultimately determined there was a lack of evidence Moon was directly involved in the alleged deletion.

The case dates back to October 2012, shortly before the presidential election that made Park Geun-hye president, when a lawmaker from Park’s Saenuri Party — the predecessor of the current main opposition People Power Party — claimed that Roh told Kim during the summit he would “surrender” the Northern Limit Line (NLL), the de facto inter-Korean maritime border in the Yellow Sea.

The statement sent immediate shock waves throughout the nation, as the border had been the site of many naval clashes between the two Koreas. North Korea refuses to acknowledge the NLL, contending it was unilaterally drawn by the American-led United Nations forces after the 1950-53 Korean War without its consent, and has called for its own maritime border line to be recognized, drawn further south.

As the controversy boiled over, lawmakers from both sides of the political aisle went to the Presidential Archives to confirm the truth, but were unable to obtain the transcripts, leading the Saenuri Party to accuse the Blue House of discarding them to conceal Roh’s conversations with Kim.

After a monthslong probe, prosecutors concluded Roh ordered his aides, including Baek and Cho, to delete the minutes in question, preventing them from being saved in the Presidential Archives.

In June 2013, shortly after Park came into office, the National Intelligence Service (NIS) revealed its own unredacted version of the 2007 summit, claiming it was responding to constant calls from both ruling and opposition lawmakers to disclose the minutes, although liberal lawmakers accused the NIS of trying to deflect attention from its own scandal.

In the documents revealed by the NIS, Roh was quoted as saying he agreed with Kim that the NLL should be converted into a “peace zone,” though there were no explicit mentions of him surrendering the maritime border.

The key legal issue involving Baek and Cho was whether the Roh-Kim transcripts they deleted were presidential records protected by law, and therefore shouldn’t have been discarded.

The first two trials ended in rulings that the transcripts were not official presidential records, exonerating the two aides from any charges. The Supreme Court on Thursday, however, said the documents were indeed presidential records because Roh had opened and read them on the Blue House’s intranet, causing his electronic signature to be left on the files.