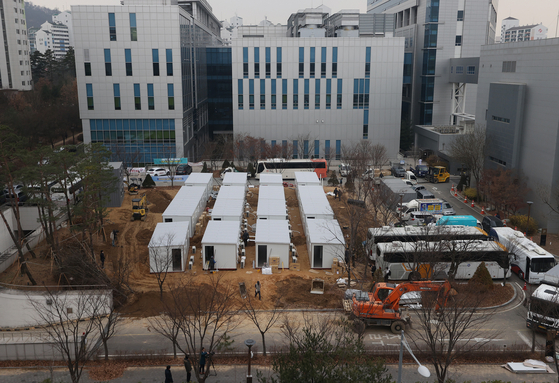 The Korea Disease Control and Prevention Agency (KDCA) announced Thursday morning that the nation added 682 new cases the day before, nearly matching Tuesday’s 686 cases. Tuesday’s toll was the highest since Feb. 28, when 909 patients were confirmed positive following the Shincheonji Church of Jesus outbreak in Daegu, which remains the largest cluster Korea has experienced.

With Wednesday’s cases added, Korea has now confirmed 40,098 Covid-19 patients in all.

While presiding over a meeting of the Central Disaster and Safety Countermeasure Headquarters Thursday, Minister of Health and Welfare Park Neung-hoo warned about the dire situation in the greater Seoul area comprising Seoul, Incheon and Gyeonggi, saying more than 3,000 people have tested positive in the region over the past week.

The health minister stressed the need to source more intensive care unit hospital beds — those for patients with severe or critical symptoms — and so-called life treatment centers for patients with mild or no symptoms, saying such facilities in the greater Seoul area were reaching capacity.

The greater Seoul area detected 489 new patients Wednesday, down from 524 the day before, yet far higher than in late August when the country was going through its second wave of the pandemic. The peak of daily cases in the region then was 313. 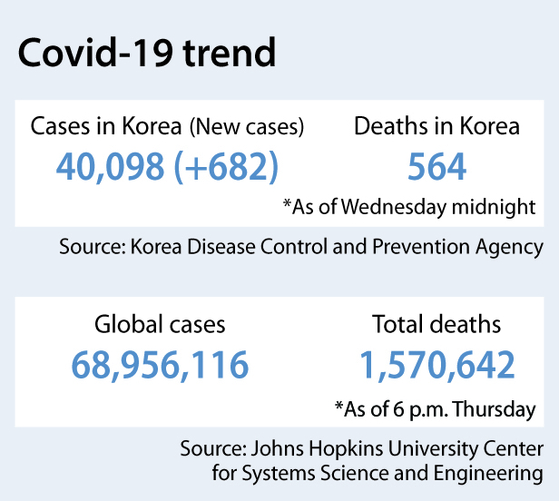 The Ministry of National Defense said Thursday it would dispatch 362 Army officers to 81 community health centers in the greater Seoul area this week to help with epidemiological investigations. The officers will receive training from an instructor from the KDCA, after which they will assist healthcare workers with administrative work, such as mapping the movements of confirmed patients.

The military’s announcement came on the heels of President Moon Jae-in’s order on Wednesday for health authorities to consider requesting help from the military and police in cranking up testing and epidemiological investigations. While presiding over an emergency Covid-19 meeting at the Blue House, Moon called on the central government to closely cooperate with local government offices and focus all resources on Seoul, Incheon and Gyeonggi to stem the spread.

The Seoul Metropolitan Government said Thursday that only three out of 62 hospital beds for patients with severe symptoms were currently vacant in the city, and that officials were in talks with hospitals to secure more beds.

The city said at least five more life treatment centers for patients with mild or no symptoms would open within this week, with several more planned to open next week. So far, 1,120 out of 1,937 beds in those facilities, or 57.8 percent, are being used.

Out of 682 patients who were diagnosed with the virus nationwide on Wednesday, 646 were domestic infections — 251 in Seoul, 201 in Gyeonggi, 37 in Incheon, 31 in Busan, 20 in South Chungcheong, 17 in Ulsan, 16 in South Gyeongsang, 15 in Gangwon, 12 in North Chungcheong, nine each in Daejeon and on Jeju Island, eight each in North Jeolla and North Gyeongsang, five in South Jeolla, three each in Daegu and Gwangju and one in Sejong City.

All of the country’s 17 major cities and provinces added at least one new case, according to KDCA data.

The remaining 36 cases were imported — 19 from the United States, five from Hungary, four from Indonesia and one each from the Philippines, Nepal, Russia, Myanmar, Kazakhstan, the United Arab Emirates, Bulgaria and Germany.