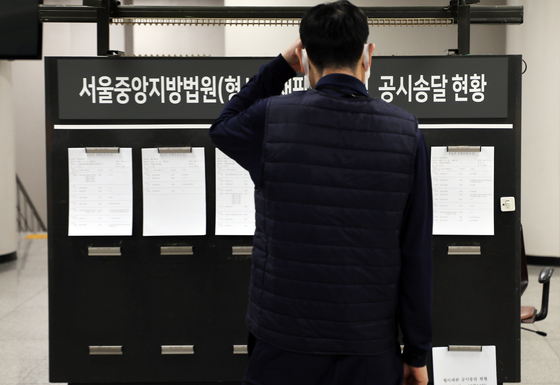 A visitor reads a bulletin board at the Seoul Central District Court in Seocho District, southern Seoul, Monday. The Supreme Court’s National Court Administration earlier that day strongly recommended all court trials be delayed so as not to fall to fall between Tuesday and Jan. 11 except for urgent cases. [NEWS1]

Social gatherings of five people or more will be banned in Seoul, Incheon and Gyeonggi from Wednesday to Jan. 3, as health authorities try to stop the coronavirus from spreading during Christmas and New Year’s Day.

Health authorities announced the latest restriction Monday as they said the country registered 926 new Covid-19 cases the day before, down from Korea’s all-time high of 1,097 cases on Saturday.

Daily cases were above 1,000 from Tuesday to Saturday, but officials didn't celebrate Sunday’s decline, saying it was simply the result of fewer tests conducted over the weekend.

A smaller number of people normally get tested on weekends compared to weekdays because private medical facilities offering Covid-19 testing usually close on Saturday afternoons and on Sundays. (Public facilities are normally open throughout the week.)

Despite the fall in day-to-day infections, 24 patients died Sunday, the highest death toll in a single day for the entire pandemic.

With health authorities fearing cases might explode this week and next due to year-end parties, the local governments of Seoul, Incheon and Gyeonggi — which comprise the greater Seoul area — each announced Monday they would cap all social gatherings within their jurisdictions at four people.

The administrative orders will go into effect Wednesday and tentatively expire on Jan. 3, the offices said.

The restriction applies to any indoor or outdoor social gatherings meant to “build bonds,” the offices said, including company lunch and dinner outings, workshops, picnics, birthdays and friendly get-togethers.

Weddings and funerals will not be affected.

Gatherings that aren’t affected by the new rule are still affected by a Level 2.5 social distancing restriction that caps all gatherings at 49 people in the greater Seoul area. Unlike those in Incheon and Gyeonggi, funeral halls in Seoul are capped at 29 people.

Violators of the new rule can be criminally charged, the local government offices warned.

The new restriction was first hinted at last Wednesday when Sohn Young-rae, a spokesperson for the Central Disaster Management Headquarters, said authorities were thinking about taking some measures from the Level 3 social distancing system and applying tweaked versions of them to the greater Seoul area, rather than cranking up the entire region’s social distancing level from the current Level 2.5 to the highest Level 3.

According to redesigned Level 3 guidelines revealed to the public last month, gatherings are supposed to be capped at nine people. Health authorities Monday said they were lowering this to four people due to recent surges in cases traced to social gatherings.

As part of efforts not to go to Level 3, Sohn also said Monday that the central government has decided to strengthen Covid-19 preventive measures in areas where the virus seemed most likely to spread during Christmas and New Year’s, such as winter sports facilities and popular Jan. 1 sunrise destinations. Specific details are planned to be announced Tuesday.

How the preventive measures will play out remains to be seen, but Jeong Eun-kyeong, commissioner of the Korea Disease Control and Prevention Agency (KDCA), warned Monday that raw statistics show the nation was likely to see between 1,000 and 1,200 patients a day next week. 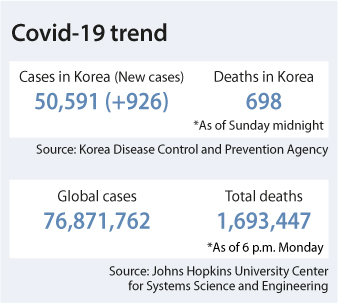 Jeong’s analysis was based on what she called the country’s “reproduction number” for the coronavirus last week, which indicates how contagious an infectious disease is. The figure was 1.28, she said, which means every coronavirus patient was likely to infect 1.28 people on average.

Health officials normally perceive any reproduction number above 1 as dangerous.

“Daily infections could fall [next week] if people practice social distancing, but if another large cluster pops up like the one at the Seoul Dongbu Detention Center, we may see even more cases,” she said.

So far, over 200 infections have been traced to the prison, where former President Lee Myung-bak is serving a 17-year sentence for corruption. His results turned out negative over the weekend.

Out of Sunday’s 926 new cases, 892 were domestic infections, while 34 were imported, according to KDCA data. Some 70 percent were detected in the greater Seoul area — 327 in Seoul, 237 in Gyeonggi and 85 in Incheon.

All 17 major cities and provinces saw a new case except for Sejong City.

Of the imported cases, 12 were from the United States, nine from Russia, four from Germany and one each from India, Indonesia, Myanmar, Jordan, Poland, Ukraine, Britain, Austria and Mexico.

A record 24 patients died Sunday, bringing total deaths to 698, while 433 people recovered, raising entire recoveries to 35,155. As of Sunday at midnight, Korea had counted 50,591 coronavirus patients in all.

In response to the recent cluster at the Seoul Dongbu Detention Center, the Supreme Court’s National Court Administration on Monday strongly recommended all court trials to be delayed so as not to fall between Tuesday and Jan. 11, except for urgent cases.

On vaccines, Sohn from the Central Disaster Management Headquarters once again stressed that the first batch of Covid-19 vaccines from AstraZeneca was “for sure” going to arrive in February or March, brushing off skepticism that the Korean government hasn’t finalized shipping plans with the Britain-based company yet.

For days, critics of the Moon Jae-in administration have been denouncing the government for lagging behind other countries in buying Covid-19 vaccines, especially as the United States and Britain began inoculations this month.

The Korean government has only signed a preorder deal with AstraZeneca to receive doses, while talks with other drug companies are underway.