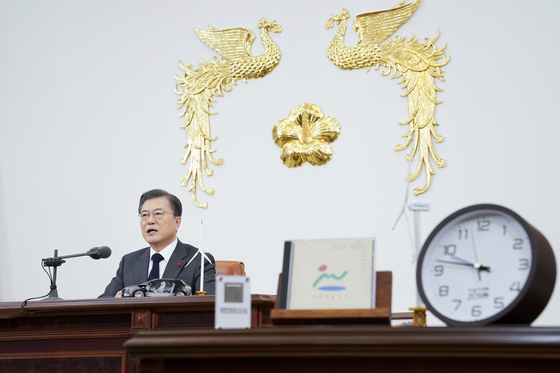 President Moon Jae-declares the vision of reaching carbon neutrality by 2050 at his office in the Blue House in a televised speech to the country on Thursday evening. [YONHAP]

Moon on Thursday evening declared his vision of going carbon neutral by 2050, pledging to become a front-runner in the global race to achieve net-zero carbon emissions.

Kospi-listed Green Chemical, a Korean company that manufactures eco-friendly plastic material, hit its daily increase limit of 30 percent Friday, reaching 8,580 won ($7.89) per share. After a slight retreat in the afternoon, it rebounded and closed at its peak.

Hu-Chems, a Kospi-listed chemical company that produces core material for fine chemicals, also rallied Friday. Its shares had at one point risen by 6 percent compared to the previous trading day, before closing at 24,150 won per share, a 1.47 percent jump.

Hu-Chems is considered one of the beneficiaries of the carbon-neutral initiative as it has earned 1 million tons of Certificate Emission Reduction (CER) from the United Nations last year for operating its factory in an eco-friendly way.

Foosung, a chemical company that manufactures electrolytes for rechargeable batteries, also experienced a surge as electric vehicle manufacturing is likely to get a boost from the eco-friendly push.

Vitzro Tech, a Kosdaq-listed company which owns 100 percent of Vitzro Nextech, increased by 3.39 percent to close at 8,850 won per share.

Korea has recently joined the global race to achieve carbon neutrality in the next 30 years.

President Moon has first mentioned the initiative during a speech to the National Assembly in October. Last month, Moon held a pan-government meeting to discuss ways to reduce emissions of carbon dioxide.

As the European Union and the United States move toward setting cross-border carbon taxes, reducing greenhouse gas emissions for highly trade-dependent Korea has become more vital, especially with the country’s economy focused on energy-consuming industries such as steel-making and petrochemicals.

“Although Korea’s industrialization came about 200 years later, we are relatively on the same starting line when pursuing ‘carbon neutrality’ because we possess low-carbon technology such as battery and hydrogen,” said Moon in a televised speech Thursday.

“It is an opportunity for us to leap forward.”