Korea's financial institutions are getting out of the business of financing the coal industry to align themselves with carbon neutrality goals for 2050.

Their commitments began last year as the Moon Jae-in government came up with its own Green New Deal, a package of policies aimed at ending Korea's dependence on fossil fuels and replacing it with increased investments in renewable energy.

Moon's first policies were announced last July. Last month, Moon announced that his administration will no longer let public funds flow into building new coal-fired power plants overseas. He made that announcement during the Leaders Summit on Climate led by U.S. President Joe Biden, which brought together heads of some 40 countries virtually.

Environmental organizations considered that announcement a big step for Korea. According to a Global Coal Exit List released by German environmental group Urgewald, Korea was the ninth largest investor in the world's coal industry as of last January.

Already, 11 countries including the United States and the United Kingdom have announced they will stop public funds from flowing into building coal-fired power plants overseas. That commitment has been echoed by over a thousand financial institutions globally including major institutions like the World Bank, European Investment Bank and the Asian Development Bank.

Though financial institutions don't directly pump out carbon the way manufacturers and energy producers do, they provide the funds that make factories get built and operate. Cutting funds flowing into coal has been considered a key role for financial companies worldwide to play to help tackle climate change.

But domestically, Korea is highly dependent on coal for energy, which means its finance industry has been a coal investor.

From 2009 through the end of June 2020, Korea's financial institutions injected 60 trillion won ($54.1 billion) into coal-fired power plants at home and abroad, according to a white paper on Korea's coal investment released in October. The paper was produced jointly by local nonprofit Korea Sustainability Investing Forum, Greenpeace Korea and the office of Rep. Yangyi Won-young of the ruling Democratic Party of Korea.

The National Pension Service (NPS) is the largest Korean investor in the coal industry with some 10 trillion won in such investments over the last decade, according to the report.

According to the Global Coal Exit List, the NPS is the 11th largest institutional investor in the world in the coal industry, holding some $11 billion worth of bonds and shares related to coal operations as of last January.

The second and third largest investors in coal in Korea are from one business group, Samsung.

With Moon officially suspending public funds going into building new coal plants overseas, "It is likely there will be no more investment into coal projects by public or private companies," a source from the banking industry said.

Even before Moon's latest announcement, private companies were preparing to get into line with the global trend of green financing and walking away from coal.

Samsung's financial affiliates announced last November they will not take part in any coal-related financing, direct or indirect.

"Coal-fired plants are major emitters of greenhouse gas and they are responsible for some 30 percent of carbon emissions in the world," said Ma Ji-hwang, a senior manager at Hana Financial Group's environmental, social and governance (ESG) team. "Cutting [investments] in coal-fired plants will contribute in a big way to the world achieving carbon neutrality."

Ma added that it has become a risk for financial companies to support the coal industry. It's inevitable they are turning from coal to sustainable energies.

Financial groups plan to cancel their investments in coal as soon as possible, although there aren't many ways to do so.

"It is realistically very challenging to terminate deals signed before such a carbon neutrality drive was in place," a source from the banking industry said on condition of anonymity. "Selling down existing project financing related to coal is also very tough as it is hard now to find interested investors considering the global market's focus on phasing out coal."

In a rare case, KB Securities sold Texas coal-fired plant project bonds worth 36.1 billion won after vowing to quit coal financing last year. The sale was completed at the beginning of this year, a KB Financial Group spokesperson confirmed.

"Companies can also engage with [coal-related] companies they are investing in to encourage them to come up with greener business strategies and open up data on their carbon emissions," said Lee Seung-hoon, a manager on Shinhan Financial Group's ESG planning team. 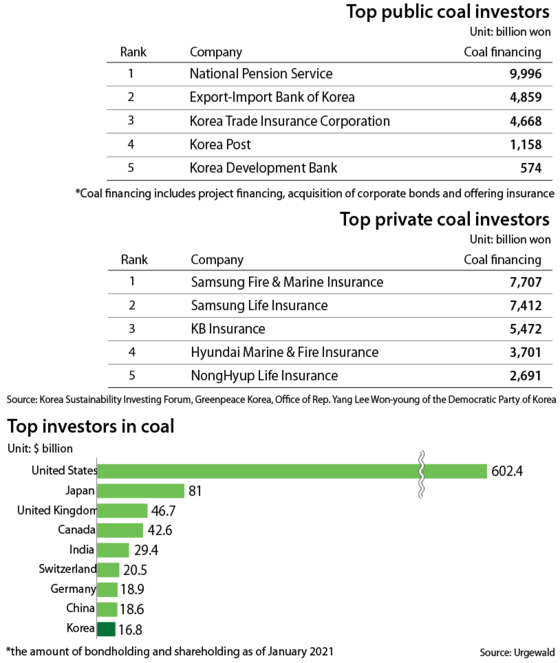 Instead of financing coal projects, financial companies are striving to find something green to invest in, including green technology, green start-ups and green infrastructure.

KB Financial Group plans to expand its ESG-related financial products, investments and loans to 50 trillion won by 2030, from the current 20 trillion won level.

Shinhan Financial Group said it will dedicate 30 trillion won from 2020 through 2030 to green financing. The group will expand loans to companies with green technologies that can curb carbon emissions and companies that replace their old, polluting industrial equipment.

In 2020, Shinhan said it used 2.6 trillion won to support green technologies and companies via loans and investment.

Of the promised 60 trillion won, 10 trillion won will be invested directly or indirectly in ESG-related projects and ESG investment funds.

The rest of the commitment will be made through the issuing of ESG bonds or through loans for projects related to the environment or social benefits.

In Korea, 82.6 trillion won worth of ESG bonds were listed on the Korean bond market as of last year, according to data from Korea Exchange.

Local asset managers and brokers are applying ESG standards to their funds.

Shinhan Asset Management, for instance, announced last month that it will reflect ESG standards in its investments. Starting this month, 16 publicly pooled domestic equity funds managed by the company must have at least 70 percent exposure to stocks that received ESG ratings of "BB" or above.

"The market's view of companies ignorant of climate risks will turn sour as time goes by," said Ko Young-hoon, head of equity research team at Shinhan Asset Management. "Companies that are major greenhouse emitters without plans to reduce emissions or expand green businesses are likely to see their corporate value fall in the future."

Ko added that asset managers can exclude polluting companies from their portfolios.

"To release better and competitive ESG funds, there needs to be standardization related to ESG assessments and [the government needs to impose] stronger obligation for companies to report their ESG-related performances," Ma said.

The government is developing a so-called K-taxonomy that will help financial companies and investors determine which companies or financial products are considered eco-friendly. Such taxonomy is supposed to address a lack of clarity about which activities and assets can be defined as green, which has long acted as a barrier to scaling up green finance.

The taxonomy will help investors tell the difference between green and so-called greenwash.

Greenwashing is the process of conveying a false impression or providing misleading information about how a company's products or businesses are eco-friendly.

The European Union unveiled its first batch of rules under its sustainable finance taxonomy on April 21, which spelt out detailed technical criteria that companies need to comply with in order to win a green investment label in Europe.

The Korean government will reference the EU guideline as well as the International Organization for Standardization, a non-governmental international organization.

Being labeled green will become a big deal as investors need to know what green labels mean before making their decisions.

"If there is a reliable taxonomy, financial companies can give preferential interest rates on loans to green companies or more easily make investment decisions," Ma said.

"We welcome recent commitments by the government and local financial institutions to exit coal financing, " said Youn Se-jong, a lawyer from the local nonprofit environmental organization Solutions for Our Climate. "The commitments, however, are for future coal projects and, to be frank, there were no more scheduled projects. So unless they cut investment from existing projects, their announcements don't really make any difference."

While Kepco announced last October it will not build coal-power plants in the future, it still decided to build two power plants under construction in Indonesia and one in Vietnam. Korea's public financial institutions as well as Hana Bank are providing financing for the projects.

Youn pointed out that commitments should be made against fossil fuels as a whole, not only coal.

"I think there is a misunderstanding, thinking natural gas is a significantly better source of energy compared to coal when it comes to emissions, but it's still a form of fossil fuel," Youn said. "The Korean government is shifting towards natural gas as a substitute for coal, but in the long run, the government should phase out fossil fuels, not just coal."

Youn stressed that the K-taxonomy to be established in Korea should allow financial companies to distinguish green and greenwash.

"The main issue will be how strictly the taxonomy will assess green activities," Youn said. "For instance, if natural gas projects get green labels because they are considered a bit better than coal, the taxonomy will end up sending the wrong signals to the market."

Jung Eun-mi, a senior research fellow and executive director of the Korea Institute for Industrial Economics & Trade, said efforts from the public sector are crucial for the country to shift to green financing and that they should come up with more detailed ways to support green financing.

"Public financial institutions like the Korea Development Bank should actively support private companies' investment in technologies, products and infrastructure that could curb greenhouse gas emissions," Jung said in a report in March. "The government should also offer tax deductions on investments into renewable energy facilities [...] while coming up with various green investment programs such as funds and green bonds to help local companies withstand a paradigm shift into the carbon neutral society."