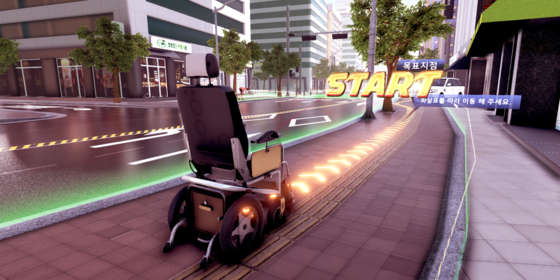 VR content developer Peligood offers VR experiences for people without disabilities that allow them to complete mundane chores from the perspective of a person with a disability. [PELIGOOD]


People are finding new ways to use virtual reality (VR) technology and games to benefit people with disabilities, helping them overcome their daily battles as well as educate others about struggles they may face.

A team of four researchers led by senior researcher Chang Yoon-hee at the Rehabilitation Engineering and Assistive Technology Society of Korea published a report titled “The Influence on Proprioception, Balance and Agility of Transtibial Amputees by Immersive Virtual Reality Game Training” this month, which found that VR games helped below-knee amputees exercise more than they normally would.

According to the report, limb amputees who wear their prosthesis must exercise to grow their muscles and train to learn a sense of balance and a new body weight center to carry out everyday activities such as walking, sitting, getting up and going up and down stairs and slopes. Since conventional training routines using treadmills or other well-known equipment focus on the repetitive movements of certain muscles, not only do trainees easily grow bored and tired, but they also fail to move other parts.

Using VR technology, amputees participate in games as avatars, acting out various movements to conquer missions which help them exercise not only vital muscles but also other parts of their bodies. For the study, three non-amputees and three amputees took part, playing 10 minutes of VR game "Move Your Body" developed by M-Line Studio, five times a week for two weeks. 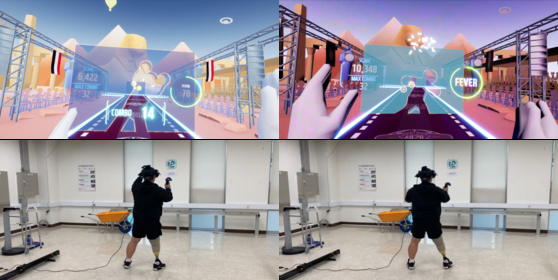 
“The results of the study confirmed that the peak heart rate during training increased by 75 percent compared to the intrinsic maximum heart rate in both groups, indicating a relatively medium level of exercise,” read the report. “Through these results, it was confirmed that immersive VR game training is effective in proprioception sensation, balance and agility, and the possibility of its use as rehabilitation intervention. These results are intended to be used as basic data for the development of VR rehabilitation training programs for people with lower limb amputation.”

There was even a case where a 62-year-old woman was found to have recovered faster by playing VR Fruit Ninja in research conducted in Europe according to the report. In Korea, a team of experts led by Seo Han-gil, the clinical professor of rehabilitation medicine at Seoul National University, co-developed a program with Tech Village to help patients suffering after a stroke to recover using VR technology. But it's not only people with physical disabilities who can benefit from VR technology.

In October, a fire station in Hadong, South Gyeongsang, trained people with developmental disabilities on fire safety and precautions using VR content. They were given the chance to experience emergency CPR, escaping a fire or earthquake and how to use fire extinguishers. Last year, the Electronics and Telecommunications Research Institute (ETRI) developed VR content to help train people with developmental disabilities for potential job opportunities by letting them virtually experience various work environments.

“Whereas the therapy sessions using physical equipment at hospitals make people reluctant, education through content entertains them," said researcher Lee Gil-haeng of the ETRI. "The person learning can participate voluntarily and so the results are 20 percent more effective than one-way education through text or video.”

Gachon University Gil Medical Center also uses VR programs to help people with anxiety disorders by exposing them to situations that may be a source of distress but in a controlled environment. 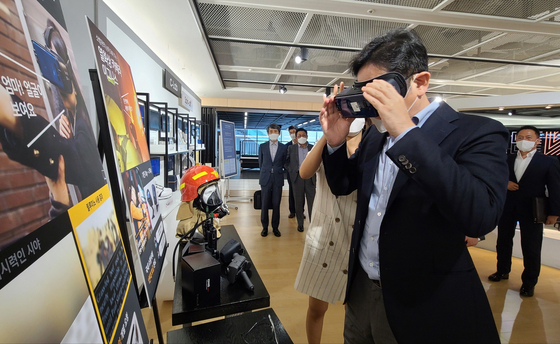 
A VR app called Relumino, which was developed by Samsung Electronics in 2017, works in conjunction with Samsung Gear VR headsets, to apply the technology to real-life situations, allowing people with visual impairments to see more clearly. Users can control the VR device to make thick lines that help them discern their surroundings. The app is currently undergoing registration as a medical device and will officially go into service after the process is complete.

VR content creation company Peligood offers two VR experience packages which let users experience life as a person with a vision impairment or as a person with a developmental disability. For the visual impairment experience, people can choose from four types of different visual impairments and virtually act out “simple” chores such as going to the bank and using an ATM, crossing a road to go to the optician, completing puzzles at home or escaping from a fire at home. 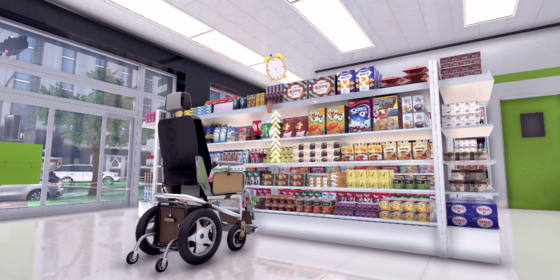 VR content developer Peligood offers VR experiences for people without disabilities to complete mundane chores from the perspective of a person with a disability. [PELIGOOD]


In the developmental disability mode, participants sit down on wheelchair-shaped seats to experience a day from a new perspective, seeing how difficult it is to reach for higher shelves at stores from a wheelchair, to cross a zebra crossing without traffic lights or to avoid people traveling at fast speeds on pedestrian roads. Peligood co-developed the program with Deokyang Haengsin Disabilities Protection Center in Goyang, Gyeonggi. The program is mostly used by care centers or rented out to schools and education centers, according to Peligood.

VR offers a whole virtual experience of what it might feel like for a person with a disability in a complete context. The game-like environment helps them concentrate and stay focused by giving them an opportunity to see and feel a different perspective in its entirety and "feel like they are actually living with a disability in the virtual environment," a spokesperson from Peligood said.

"Most disability experience programs center around showing what the specific disability feels like," the Peligood spokesperson said. "In one of the programs for developmental disabilities, we provide a situation where the user experiences a collision with someone riding on an electric kickboard. VR allows people to experience such situations regardless of the physical limitations of the real world. We hope to further develop programs to educate people on disabilities next year."

Group for people with disabilities continues with subway protests