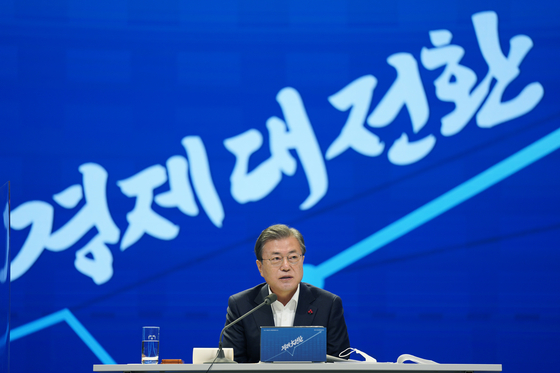 Doubling down on frontloading has become the go-to strategy for the government, which is desperately working to revive an economy that was struggling even before Covid-19 hit.

It plans to spend 63 percent of its full-year 2021 budget in six months. That’s a record.

To get the funds to the people, the government is rolling out a wide range of programs or expanding some that get cash directly into the hands of those who need and are most likely to spend it. The tax credit for credit card spending will be increased, the reduction in the consumption tax for car purchases will be extended for six months and buyers of energy efficient home appliances will receive a 20 percent refund.

The refund on home appliances will be limited only to people that live on government grants, people with certain disabilities and families of those who fought in the Korean War, independence fighters during the Japanese colonial period or participants in the May 18 Gwangju Democratization Movement.

The aim is to achieve a 3.2 percent economic growth next year through a “swift and strong recovery." This target, although lowered from the 3.6 percent that the government projected in June, is relatively optimistic. The Organisation for Economic Cooperation and Development (OECD) is projecting 2.8 percent, the IMF 2.9 percent, the Korea Development Institute (KDI) 3.1 percent and the Bank of Korea 3.1 percent.

If achieved, it would be the first 3 percent economic growth since 3.2 percent in 2017.

The government projected next year consumer spending to increase 3.1 percent and company investments, including on plant and machinery, up 5.8 percent. It has high hopes for exports, with an 8.6 percent expansion projected, and sees 150,000 jobs added in 2021.

The government will push forward its discount coupon programs, with the goal of encouraging consumer spending.

Massive state-led investment is also part of the plan. The Korean New Deal, a semiconductor cluster in Yongin, Gyeonggi, and private investment in infrastructure will involve 110 trillion won ($100.6 billion) of investment.

Hiring for government jobs will be earlier, with a goal to hire 70 percent of public servants for 2021 by the third quarter, while 100,000 internships will be created in the public and private sector. State-owned agencies will take in 22,000, up from 14,000 as of September.

To encourage internships in the private sector, the government will pay up to 88,000 won a month for six months per intern hired by small- and medium-sized enterprises (SMEs) to cover labor and management costs. For those that hire young people in IT fields, that figure could be as high as 1.9 million.

Through these subsidies, the government hopes to encourage 800,000 internships in the private sector.

The government will allocate 3.2 trillion won of next year’s budget to create 1.04 million jobs for vulnerable people, including young people, the old and those with disabilities.

President Moon Jae-in vowed that the year 2021 will be the year of major economic transitions.

“It will start with overcoming the coronavirus crisis,” Moon said during the government 2021 economic plan briefing held at the Korea Chamber of Commerce and Industry in Seoul on Thursday.

President Moon stressed that compared to most countries struggling with the pandemic, Korea has done well economically.

“The biggest harvest is raising the name value of Korea, turning Korea’s discount to Korea premium,” Moon said noting the contribution of the medical community, the government, small businesses and the chaebol.

“We have spent the year amid an unprecedented [crisis] situation from coronavirus,” Moon said. “We have achieved a growth recovery as projected and planned in the third quarter, and this year achieve the best growth performance among the OECD countries.”

In order to “completely” overcome the coronavirus and return the country to normality, the full capacity of “K-quarantine” will be needed, he noted.

Most of the plans announced were a rehash of plans that were announced earlier, including the 3 trillion won from next year's budget that is to be used for small stores that are being affected by strict social distancing.

With the number of cases increasing by more than 1,000 a day in recent days, the government is under pressure to raise the social distancing to Level 3, the highest. Even the Korean government's struggle to secure Covid-19 vaccines could affect next year's plan.