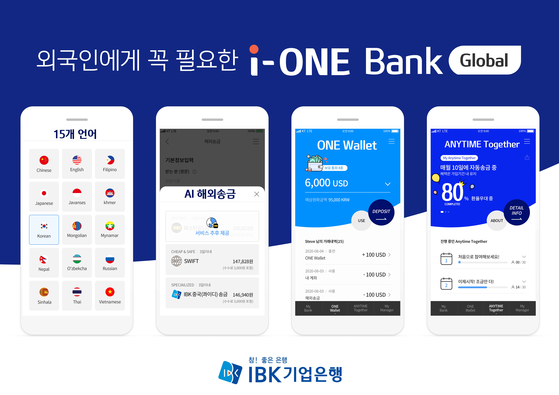 
The Industrial Bank of Korea (IBK) has improved its i-ONE Bank Global, a mobile banking app for foreigners.

IBK now supports 15 languages on the app, including Chinese, English, Japanese and Indonesian, from the current four, with a goal to expand the number of users. Exchange services have also been improved, according to IBK.

It has also become easier for the app users to make transactions and sign up for new finance products through the bank’s mobile authentication system. Users will just have to insert six digits.

Submission of paperwork necessary to open an account can now be done via the app.

Another newly added function is an electronic wallet, which makes it easier for the app users to send or withdraw foreign currency exchanged on the app.

IBK “raised the convenience and accessibility for foreign customers, whose contactless business handling has been limited, through the expansion of contactless services,” said the bank in a statement. The bank pledged to further pursue contactless finance services for foreigners.

Hyundai Card applications can be made in English on app