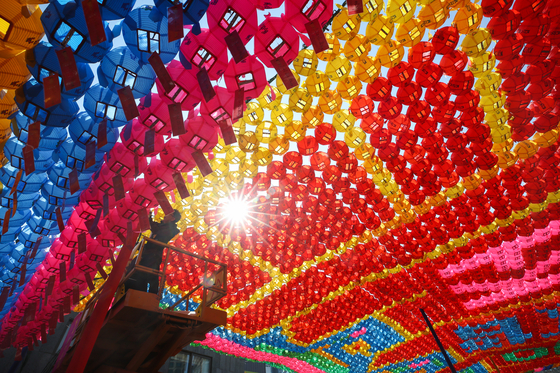 Colorful lanterns are prepared for the 2020 Yeondeunghoe Lantern Lighting Festival, which was postponed from April to May due to the coronavirus pandemic. [NEWS1]


Yeondeunghoe, the celebration of Buddha's birthday, became the 21st Korean item to make it onto Unesco's Intangible Cultural Heritage of Humanity List.

Unesco's 15th session of the Intergovernmental Committee for the Safeguarding of the Intangible Cultural Heritage, which began on Dec. 14 at Unesco's Paris headquarters, decided Wednesday to inscribe the festival, officially known as "Yeondeunghoe: Lantern Lighting Festival in the Republic of Korea" on its Representative List. The announcement came around 10 p.m. on Wednesday.

Following the announcement, Chung Jae-suk, head of the Cultural Heritage Administration (CHA), who had been attending the session virtually from the main hall of the National Palace Museum of Korea in central Seoul, expressed her appreciation.

"It is with great pleasure that we learn that the evaluation body highly commends Yeondeunghoe for its function in encouraging dialogue among communities and cultures, which led to enhancing the visibility of intangible cultural heritage in general," she said.

"I believe that the inscription of a property or an element on the Unesco lists offers a great opportunity to enhance mutual understanding between countries and deepen their friendships. However, it is not always the case in reality as seen in many recent examples of Unesco inscriptions. I do anticipate that the spirit of dialogue of Yeondeunghoe will be widely shared, offering inspiration in addressing conflicts between countries." 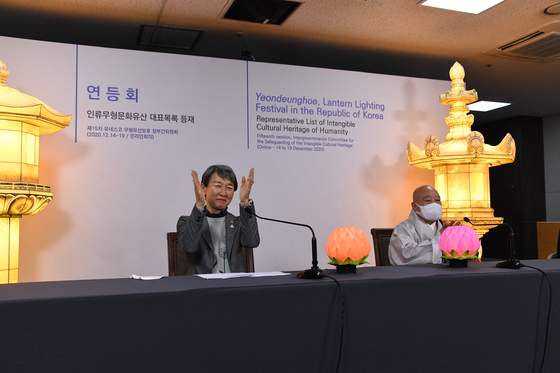 Chung Jae-suk, left, applauds the announcement by Unesco’s 15th session of the Intergovernmental Committee for the Safeguarding of the Intangible Cultural Heritage of the inscription of Korea's Yeondeunghoe on the Representative List of Intangible Cultural Heritage of Humanity on Wednesday evening at the National Palace Museum of Korea, central Seoul. She is joined by Buddhist monk Wonhaeng, president of the Jogye Order of Korean Buddhism, right. [CULTURAL HERITAGE ADMINISTRATION]


Held on the eighth day of the fourth month of the Lunar calendar, which usually falls in late April or early May, Yeondeunghoe is celebrated across the country by believers and nonbelievers. Streets are festooned with colorful lotus lanterns and people participate in parades carrying lanterns they made to express good wishes or themselves, families, neighbors and the entire nation.

During the session, the Committee took note of the inclusiveness of Yeondeunghoe, which contributes to overcoming social boundaries and expressing cultural diversity. The Committee noted that the lantern lighting festival plays the role of enhancing social cohesion.

According to CHA, the Yeondeunghoe registration emphasized that "non-Buddhists form an integral part of the festival by participating in lantern lighting events organized by local celebration committees, which get formed in different regions of the country to oversee the local festival. It's a festival at which individuals participate as equal members of society regardless of gender or age."

It also highlighted the fact that the lanterns are "crafted by traditional artisans using traditional Korean paper known as hanji, and that the knowledge and skills are transmitted across generations through the repeated annual practice of Yeondeunghoe." 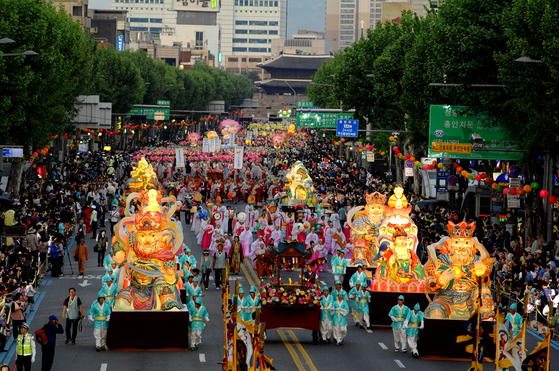 A parade during the annual Yeondeunghoe Lantern Lighting Festival. [YONHAP]


Such features, according to CHA, are passed down from generation to generation, while getting revised and recreated in response to history and the environment.

In 2014, for example, when the whole country was saddened by the sinking of the Sewol Ferry on April 16, which took the lives of more than 300 people, the Yeondeunghoe festival was canceled and a new theme was announced, which was, "Sharing sadness and collecting hope."

"This shows that Yeondeunghoe is always practiced in close connection with the society's concerns and sentiments of the time," said Cultural Studies Professor Bak Sang-mee at Hankuk University of Foreign Affairs, who is also a member of the Cultural Properties Committee.

Buddhist monk Wonhaeng, president of the Jogye Order of Korean Buddhism, who watched the online session at the National Palace Museum, said with a sigh of relief that "the Committee gave Koreans a precious gift today."

"Yeondeunghoe is Korea's representative culture and a festival that has existed throughout Korea's long history," he said.

"Through the community spirit of Yeondeunghoe that prays for a world full of happiness by lighting up the darkness, we hope the coronavirus can be tackled so that we can successfully hold the Yeondeunghoe next April."

Records of Buddhism and the lotus lanterns date back to the 9th century, according to the Samguksagi, the 12th century historical text of Korea's Three Kingdoms. There are other records that also show a lotus lantern festival organized around Buddha's birthday in the Goryeo Dynasty (918-1392). It was designated as a national intangible cultural asset in 2012.

With the addition of Yeondeunghoe, Korea now has 21 intangible cultural assets, which include pansori (traditional narrative singing), the royal ancestral ritual at the Jongmyo Shrine and its music, as well as the culture of Jeju Island's haenyeo, or female divers. The last successful item Korea got onto Unesco's Intangible Heritage list was ssireum, or traditional Korean wrestling, which also became the first intangible Cultural Heritage of Unesco jointly registered by South and North Korea.