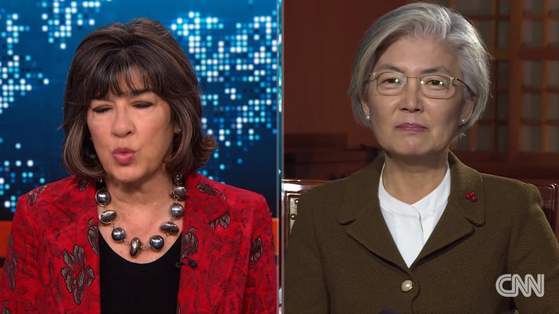 “This is happening in a very sensitive area — the most militarized zone in the whole world — with people living right next to the border area,” Kang told Christiane Amanpour, CNN's chief international correspondent, on Wednesday, arguing that there can be limits to the freedom of expression when it poses a danger to people.

On Monday, the South Korean National Assembly passed a bill revising the Development of Inter-Korean Relations Act and stipulated a prison sentence of up to three years or a fine of up to 30 million won ($27,000) for sending items like leaflets to the North from the inter-Korean border.

Critics of the bill, including defector groups and human rights organizations, are arguing that banning the leaflets infringes basic rights including the freedom of expression.

“Freedom of expression, I think, is absolutely vital to human rights,” Kang told CNN. “But it's not absolute. It can be limited, according to the ICCPR [International Covenant on Civil and Political Rights].”

Under the ICCPR, a multilateral United Nations treaty ratified by both Koreas, the right to freedom of expression is “subject to certain restrictions” including the protection of national security or public order.

Kang said that “people living near the border have been asking that these activities stop for years,” noting that the demilitarized zone (DMZ) is a “highly militarily tense area where anything can go wrong,” or “lead to even bigger clashes.”

She cited an incident in October 2014 in which North Koreans shot at balloons loaded with leaflets released by South Korean activists with antiaircraft artillery. South Koreans fired back.

Kang also noted that in June, North Korea blew up a joint liaison office in Kaesong at the inter-Korean border, blaming the sending of propaganda leaflets.

When asked by Amanpour about the coronavirus situation in North Korea, Kang replied, “Given that this is a virus that spreads very quickly, even in countries that quickly closed down, the virus got in and spread. So it's hard to believe that there aren't any cases [in North Korea], but that's the official story."

North Korea has maintained that it has no confirmed Covid-19 cases.

Last week, Kim Yo-Jong, the North Korean leader's powerful younger sister, specifically called out Kang for remarks on the coronavirus situation in North Korea at a forum in Bahrain earlier this month. Kim said Kang may have to “pay dearly” after Seoul’s top diplomat told the Manama Dialogue that Pyongyang's claim that it has no coronavirus cases was hard to believe.

“We have offered to work together,” Kang told CNN on Covid-19 cooperation with the North. “But they have not replied to our offer of working together and assisting to fight this pandemic.”

Kang expressed optimism on Seoul-Washington cooperation with the incoming Biden administration when asked about her thoughts on the transition to a new U.S. presidency.

She replied, “Given the signals coming from the incoming team during the campaign, after the campaign, their remarks about the importance of the alliance, the importance of South Korea in their global scheme of things, I expect to have a very close, and very good working relationship with my counterpart, and our team and their team.”

"With the Trump administration, given his very unconventional style, I think that did pose a challenge to those of us who are more used to and comfortable with the more conventional style of doing diplomacy," Kang said.

She said she had been able to work “closely” with U.S. Secretary of State Mike Pompeo despite their differences, when asked about any difficulties South Korea had faced with the outgoing Donald Trump administration.

"We disagreed on many things. We had arguments, but I think the nature of the relationship is such that we can really have a genuine discussion on issues that we don't agree on and move on," she said on Pompeo.

Kang expressed hopes for the “same level of honest close discussion with the incoming administration.”