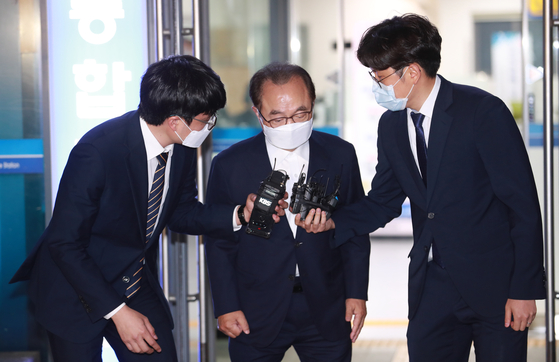 Former Busan Mayor Oh Keo-don, center, is questioned by reporters as he steps out of the Busan District Court in June, after a warrant filed for his arrest was denied by the court. [YONHAP]


Prosecutors on Wednesday requested a second arrest warrant for former Busan Mayor Oh Keo-don, after the first was denied months ago, raising speculation that new evidence may have emerged regarding allegations of sexual assault against him.

Oh, who was elected in 2018 as a member of the ruling Democratic Party, stepped down as Busan mayor this April after admitting in a live press conference he had sexually assaulted a City Hall employee in his office.

The former mayor was also accused of abusing the power of his office, along with defamation, obstruction of justice and violating the Public Official Election Act. The last allegation was owed to the conspicuous timing of his press conference, which took place shortly after the April 15 general elections.

In August, after four months of investigations, police asked prosecutors to indict him on one count of making inappropriate sexual contact but cleared him of other political charges.

Though he admitted to sexual assault, Oh has denied each of the other accusations.

His victim also denied the allegation that she received any political pressure to delay raising the accusation after the election, as conservative opposition figures have suggested in an attempt to frame the case as a conspiracy potentially involving the Blue House.

Earlier in June, prosecutors filed for Oh’s arrest during an ongoing police investigation, but the request was turned down by the court, which cited the suspect’s advanced age and that he was unlikely to attempt to tamper with evidence.

Now almost half a year later, a division in charge of sexual crimes at the Busan Prosecutors’ Office said it has once again filed an arrest warrant for Oh in court.

Prosecutors in Korea rarely file a second arrest warrant after one has already been denied. The development led analysts to suggest prosecutors may have found new evidence to prove some of the other allegations set against the former mayor.

Last month, prosecutors raided Busan City Hall, where they are believed to have seized documents and computer hard drives from various offices. The mobile phone of a close aide to Oh was also taken and analyzed for evidence, while the same aide, as well as over a dozen others, were taken in for questioning on several occasions.

Prosecutors have meanwhile remained mum about what they have found, noting they could not comment on an ongoing investigation.

The court hearing on the new warrant request is due to take place Friday morning at the Busan District Court, with Oh likely to attend as he did in June.