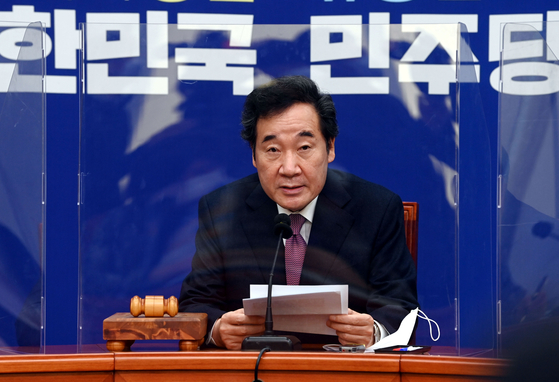 Ruling Democratic Party Chairman Lee Nak-yon announces the results of a party referendum on whether to field candidates for next year's by-elections for Seoul and Busan mayors. [YONHAP]


The ruling Democratic Party decided to field candidates in next year’s by-elections for Seoul and Busan mayors after an overwhelming majority of its members voted in support of the bids on Monday.

A whopping 86.64 percent of the party’s enfranchised members voted in favor of revising a clause in the party’s constitution that barred it from fielding candidates for vacancies left by former Busan Mayor Oh Keo-don and the late mayor of Seoul, Park Won-soon.

In April, Oh resigned as Busan’s mayor after admitting to molesting a City Hall employee, while Park was found dead in an apparent suicide in July after apparently becoming aware that his former secretary had filed a complaint with the police alleging years of sexual harassment.

The DP faced intense pressure from opposition parties and civic groups about nominating candidates for the empty seats in next April’s by-elections on the grounds of its own rules.

First introduced when President Moon Jae-in led the party as chairman, Clause 2 in Article 96 of the DP’s constitution states that the party will not nominate a candidate in a by-election if a party member elected to a public office loses the post due to grave misconduct.

But the prospects of not contesting mayoralties of Korea’s two largest cities a year ahead of a presidential election generated fierce internal debate, prompting DP Chairman Lee Nak-yon to call for an online vote among paid party members to determine whether to add an exception to the clause.

A total of 211,804 of the party’s 800,000 or so paid members took part in the vote, according the party. The resulting landslide in favor of a revision was characterized by DP spokesperson Rep. Choi In-ho as a vote of confidence in the party’s current leadership. The DP has a total membership of around 4 million people, making it Korea's largest party.

Lee appeared more cautious in characterizing the results, saying that the consensus among party members “does not mean the wrongdoings that led to the vacancies and by-elections in Seoul and Busan has vanished.”

While he extended apologies to the people of Seoul and Busan, as well as the female victims of the alleged actions by the former mayors, Lee added that “the responsible action for a public party to take is to respect the choice of the voters” by fielding “the most ethical and competent candidates” to run the two cities.

The DP was set to call a Supreme Council meeting to ratify the online vote and begin the process of revising the party constitution through its central committee as early as Tuesday, according to Choi. Internal party bodies will also be set up to handle and prevent sexual abuse cases, the spokesman added.

The DP’s decision to participate in the April by-elections invited heavy, unsurprising criticism from the main opposition People Power Party (PPP), which was hoping to win back control of the two cities and expand its support base in preparation for the presidential election in 2022.

“This is a party that has lost its honesty,” said Kim Chong-in, the PPP’s interim chairman. “Not everyone will understand whether it is a justified act to break one’s promises to the people based on a referendum among its members.”

Other opposition figures cast doubt on the legitimacy of the DP’s internal vote, noting turnout among the party’s paid members was less than 30 percent and perhaps not representative of actual opinion within.

Exposing skeletons in the closet