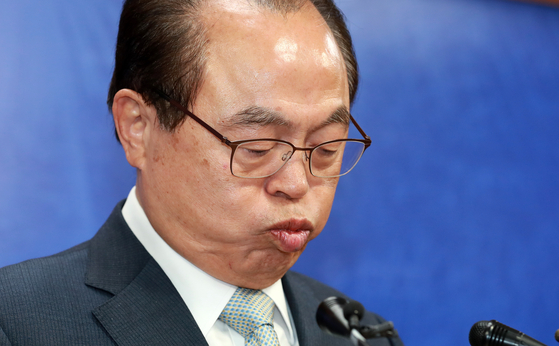 Busan Mayor Oh Keo-don holds a press conference on April 23, 2020 to admit that he sexually molested a city hall employee and announced his resignation. [YONHAP]


Following four months of investigations, police on Tuesday asked prosecutors to indict former Busan Mayor Oh Keo-don for sexually assaulting a city employee, but cleared him of other political charges, such as delaying his resignation until after the April general elections.

The Busan Metropolitan Police Agency said Tuesday that it has investigated Oh for 13 possible charges, but only recommended that prosecution indict him on one count of making inappropriate sexual contact — to which he publicly admitted. Oh, 71, resigned from office on April 23 after admitting in a live press conference that he had sexually assaulted a city hall employee.

Police also investigated Oh following allegations that he had abused the power of his office, along with those of defamation and obstruction of justice.

He was also suspected of violating laws governing the Public Official Election Act and Local Public Officials Act. Suspicions were raised about the conspicuous timing of his press conference, as it took place shortly after the April 15 general elections, while the alleged assault took place early in March.

Oh was suspected of delaying his resignation to protect the ruling Democratic Party (DP) from political repercussions. After three unsuccessful runs, Oh was elected in 2018, becoming the first DP mayor of the southern port city, traditionally a conservative stronghold.

A court previously rejected prosecutors' request that Oh be detained during the investigation.

Police said Tuesday that they have cleared Oh of all the other allegations he faced.

“We’ve conducted investigations into various suspicions raised by the media and civic groups since Oh stepped down on April 23, but found no evidence to back them,” the Busan police said in a press statement.

“The timing of Oh’s resignation was not decided by Oh himself or his political secretaries,” the police said. “As the victim had said, the timing was decided without any outside pressure [from the DP or Blue House].”

Police also said they found no evidence to back suspicions that Oh had molested another victim last year. Civic groups criticized that conclusion.

An alliance of 290 women’s rights groups from around the country said the victim had suffered unnecessary pain, as investigators failed to speedily proceed with the case. Police spent 140 days investigating the allegations against Oh.

“The people are upset that the police [put little effort into] the probe,” Ahn Il-gyu, secretary general of a local civic group, Busan-South Gyeongsang Future Policy, told News1. “The suspicion that Oh had intentionally scheduled his resignation until after general elections was an important issue, but it was not laid bare by the police."

“The police showed that they have no intention or ability to investigate this case,” said UFP Rep. Kim Mi-ae, who represents Haeundae B District of Busan.

She pointed out that President Moon Jae-in promoted Busan Metropolitan Police Agency’s chief Kim Chang-yong to head the National Police Agency in July, in the middle of the probe into Oh. She alleged that Kim must have been promoted for going easy on Oh and dismissing incriminating charges against the DP and the Blue House.

“The police just made a fool of the Busan people who wanted to know the truth,” she said. “We have to hope that the prosecution will do its job correctly.”