[TEST DRIVE] Sporty GV70 offers luxury, style and a few too many gadgets

[TEST DRIVE] Sporty GV70 offers luxury, style and a few too many gadgets 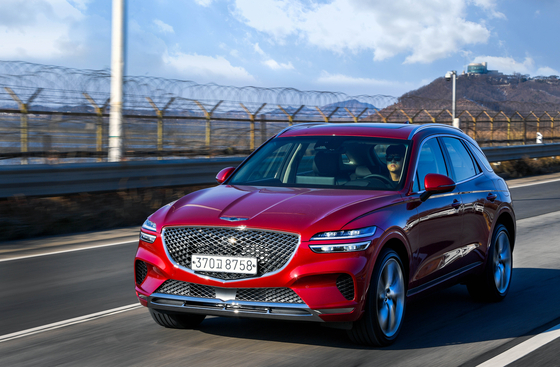 
GAPYEONG, Gyeonggi — The Genesis GV70 offers the same level of luxury as the bigger GV80 that launched in January, but suits quite different needs.


While the big-size SUV focused on stability with a weighty driving feeling and roomy interior, the midsize GV70 definitely veers toward tech-savvy and sporty, although whether its abundant high-tech features actually enhance the driving experience will depend on the driver.

The Korea JoongAng Daily got behind the wheel of a GV70 equipped with a 3.5-liter (0.9 gallon) turbocharged petrol engine on Tuesday to make a 47 kilometer (29 mile) round trip to Gapyeong, Gyeonggi, which included congested urban roads, an icy winding mountainside road and an empty highway.

One of the new features included in the GV70 that’s not in the GV80 is a fingerprint authentication system that allows the driver to turn on the engine without a physical key and activate an in-car payment system without a security code. 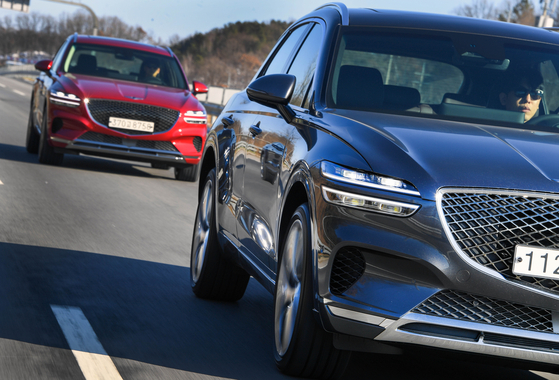 
The coin-size pad for fingerprint recognition is placed next to the power button.

The technology itself works perfectly. It takes about a minute or two to register a fingerprint into the system, requiring the driver to scan various sides of the finger several times to flawlessly encode the print. The car can save up to two fingerprints. Despite concerns that the car will not be able to quickly recognize the fingerprint, as sometimes happen with smartphone fingerprint scanners, the vehicle responded to this reporter’s finger quickly and accurately.

But as smart as that scanner might be, its role in the GV70 is more style over substance, as you can't actually get into the car without either a physical car key or a smartphone app to unlock the doors.


Once inside, the futuristic displays instantly catches your eye, including a 12.3-inch 3-D digital cluster behind the steering wheel and 14.5-inch infotainment screen above the dashboard. 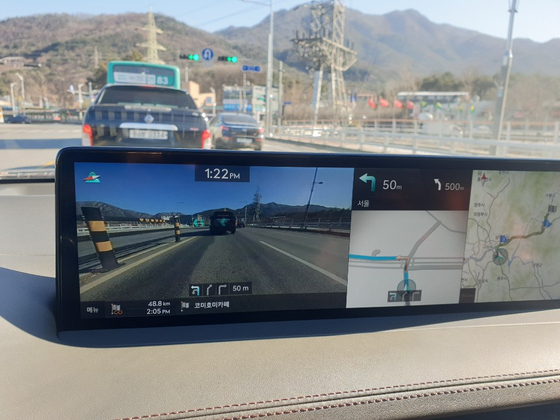 
The navigation map’s augmented reality (AR) technology has been upgraded to give more precise directions. It isn't the most intuitive system, however, and it does take some time to understand exactly what the AR system is trying to tell you to do.

The live footage from the front of the car displayed on the infotainment system can be confusing as well, ultimately forcing this reporter to switch back to a good old-fashioned 2-D system.

The highway assistant system let the vehicle drive on its own at a set speed while maintaining a set distance from the car in front in the center of the lane, without the driver’s hands on the steering wheel.

If the stop is longer than 30 seconds, the partially autonomous driving system turns off and the driver needs to take over.

With a maximum 380 horsepower, the acceleration was strong but still smooth, and due to its compact size, the GV70's agility exceeded the bigger GV80 on winding courses.

With Sport mode selected out of the four driving modes — Eco, Comfort, Sport and Custom — the engine growls and the car starts responding much faster. Surrounded by snow-covered pine trees on a curvy winding course, Sport mode offers a truly mind-blowing driving experience.

The overall exterior design is similar to the GV80 with the large-size crest grille and dual horizontally stacked lamps, except the roofline. Emphasizing the sportiness of the midsize SUV, the GV70 has a sloping roofline resembling a coupe.