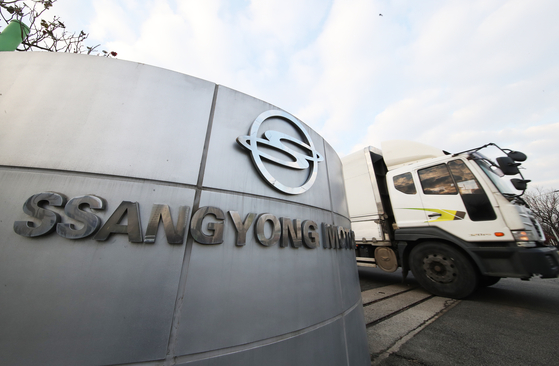 Entrance of SsangYong Motor's Pyeongtaek factory in Incheon on Monday. The cash-strapped automaker filed for court receivership due to a liquidity problem. [YONHAP]

The auto company has 165 billion won ($149 million) worth of overdue payments from domestic and foreign creditors.

“SsangYong Motor has been negotiating with foreign financiers to roll over a 60-billion-won loan on Dec. 15, but failed to come to an agreement,” the company said in a release Monday evening.

“It was clear that if the company pays back the debt, it will cause a great setback to the company’s operations, which is why the company inevitably filed for the rehabilitation process.”

The automaker has been faced with snowballing debt and tepid sales.

Another 90-billion-won loan from the Korea Development Bank (KDB) was due Dec. 21 but was defaulted on, along with 15 billion won from Woori Bank due on the same day.

The KDB was expected to decide whether to roll over its loan on Monday but hadn't as of press time. The state-run bank has been claiming that it would roll over the loan only if the foreign financiers agree to do the same.

SsangYong Motor said it has filed for what's called an autonomous restructuring support (ARS) program with the court on Monday.

An ARS program holds off the receivership process by a maximum of three months to earn the troubled company more time for negotiations with creditors — and hopefully withdraw the receivership request.

“During the period, SsangYong Motor will focus on negotiating with creditors and large shareholders as well as negotiating with potential investors so that we can withdraw the court receivership request,” the company said.

Mahindra & Mahindra, which owns 74.6 percent of the cash-strapped automaker, has been looking for a new investor for SsangYong Motor and hoping to reduce its stake to below 50 percent.

The Indian automaker scrapped a 230-billion-won investment plan for SsangYong Motor earlier this year, and instead announced a one-time 40-billion-won emergency fund.

American auto company HAAH Automotive was said to have interest in SsangYong Motor.

It has been hard for SsangYong Motor to find a new investor. It has few new models and is making slow progress in developing an electric powertrain and autonomous driving technology.

It posted a net loss for the 15th consecutive quarter in the third quarter.

The company sold 96,825 cars this year as of November, 20.8 percent less than the same period last year.

Its external auditor, Samjong KPMG, has refused to issue its audit opinion for three quarters in a row this year.

“Its liabilities also exceed its asset by 535.7 billion won. In a situation like this, we have doubts whether this company can exist in the future.”

The company underwent a similar procedure in 2009 in the aftermath of the global financial meltdown when it filed for court receivership. Mahindra & Mahindra came forward in 2010 to purchase the troubled automaker for 523 billion won.