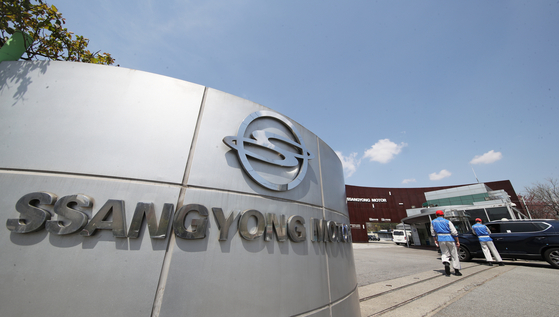 SsangYong Motor was put into court receivership Thursday after it failed to find a new investor.

The Seoul Bankruptcy Court approved SsangYong's court receivership program on Thursday, the second time the automaker underwent such a process. The last time was in 2009 before it was acquired by India's Mahindra & Mahindra.

“SsangYong Motor is in a condition in which the company cannot repay debt without dealing a critical blow to the business,” said the court.

In Korea, court receivership is the last step before bankruptcy. The court assesses the company's possibility of being turned around based on its debt, assets and a rehabilitation plan. If the court sees no hope, it declares the company bankrupt.

Now that the court-led restructuring program has started, SsangYong will have to report its liabilities between April 30 and May 13 and submit a turnaround plan by July 1.

SsangYong Motor said Wednesday it will find a new investor before the plan is approved by the court.

“Apart from the publicly known potential investor, a score of companies have unofficially showed interest in the acquisition — that’s a hopeful sign,” SsangYong said in a Thursday statement.

This potential investor referred to was HAAH Automotive, U.S.-based auto retailer that’s been in talks with SsangYong and its India-based parent company Mahindra & Mahindra since last year.

SsangYong first applied for court receivership in December and was granted a three-month grace period to find an investor.

For SsangYong, the plan with HAAH would have greatly shortened the court-led restructuring process to months. But HAAH Automotive did not submit a letter of intent within the March 31 deadline set by the Seoul Bankruptcy Court.

SsangYong said it has hope for a new search for a potential investor. The company said an open tender process in which multiple candidates compete with each other may work to its benefit.

“For protection of our creditors and the company’s revival, normalizing production is a core task and we will push efforts to reach an agreement with our suppliers as soon as possible,” said Chung Yong-won, SsangYong’s strategy department manager and court-appointed receiver.

SsangYong Motor suspended production at its Pyeongtaek, Gyeonggi, plant for seven working days until April 16 due to a chip shortage in the auto industry.

The Korean automaker has been posting net losses every quarter since the fourth quarter of 2016. Last year alone, it posted 504.3 billion won in net losses. Its total liabilities stood at 1.9 trillion won as of end of last year

SsangYong Motor shares were suspended on Dec. 21 when it filed for court receivership.

On Wednesday, the Korea Exchange granted a one-year grace period for it to remain listed until April 14, 2022.