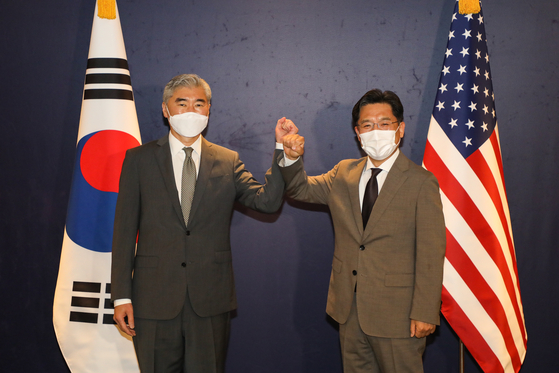 South Korea's top nuclear envoy, Noh Kyu-duk, right, and his U.S. counterpart, Sung Kim, bump their fists ahead of a meeting at The Plaza Hotel in central Seoul Monday morning to discuss efforts to get North Korea to return to the dialogue table, including humanitarian cooperation. [JOINT PRESS CORPS]

"We discussed possible humanitarian assistance to the DPRK," Kim told reporters after the meeting. "I reaffirmed U.S. support for inter-Korean dialogue and engagement, as stipulated by the joint statement between our two leaders in May, and will continue to lend our support to inter-Korean humanitarian cooperation projects."

The DPRK stands for the North's official name, the Democratic People's Republic of Korea.

He added that the two sides also discussed "humanitarian support to the North through international organizations and nongovernmental organizations."

North Korea closed off its border in early 2020 in response to the Covid-19 pandemic and has faced difficulties coping with food shortages and natural disasters such as flooding alongside stringent international sanctions on the regime for its nuclear and ballistic weapons program. Pyongyang officially claims it has no Covid-19 cases and has faced delays in receiving coronavirus vaccines through the World Health Organization's Covax Facility mechanism.

Kim, who doubles as U.S. ambassador to Indonesia, said he had a "very good discussion" with Noh, adding that Seoul and Washington "maintain close coordination and cooperation to charting a path towards the complete denuclearization and a lasting peace regime on the Korean Peninsula."

The U.S. nuclear negotiator's visit comes amid heightened bellicose rhetoric from North Korean senior officials in protest of the ongoing Seoul-Washington joint military drill which kicked off last week and will run through Thursday. The North has been unresponsive to recently revived inter-Korean communication lines since a downsized version of the computer-simulated joint exercise began on Aug. 16 due to the Covid-19 situation.

Addressing such protests from the North, Kim said, "The United States does not have hostile intent towards the DPRK. The ongoing U.S.-ROK [Republic of Korea] combined military exercises are longstanding, routine and purely defensive in nature and support the security of both of our countries."

Echoing his message offering unconditional talks in his last visit to Seoul in June, Kim said, "I continue to stand ready to meet with my North Korean counterparts anywhere, at anytime."

Quoting U.S. President Joe Biden, Kim described the U.S. commitment to the defense of South Korea as being "sacred."

At the beginning of the talks with Kim Monday, Noh noted the meeting takes place at a "very important time," during a "sensitive" period on the Korean Peninsula and amid a "volatile" situation internationally.

Noh said that the two sides shared the view "that we need to break the status quo and make progress" and that he hoped for "flexible and creative" ways to engage the North and advance the shared goal of complete denuclearization and the establishment of permanent peace on the Korean Peninsula. North-U.S. denuclearization talks have been at an impasse since 2019.

Russia is a member of the now-defunct six-party talks, also involving China, Japan, the United States and the two Koreas, and a permanent member of the UN Security Council. Kim could have asked Russia to use its influence to help convince the North to return to the dialogue table and also to adhere to United Nations sanctions on Pyongyang.