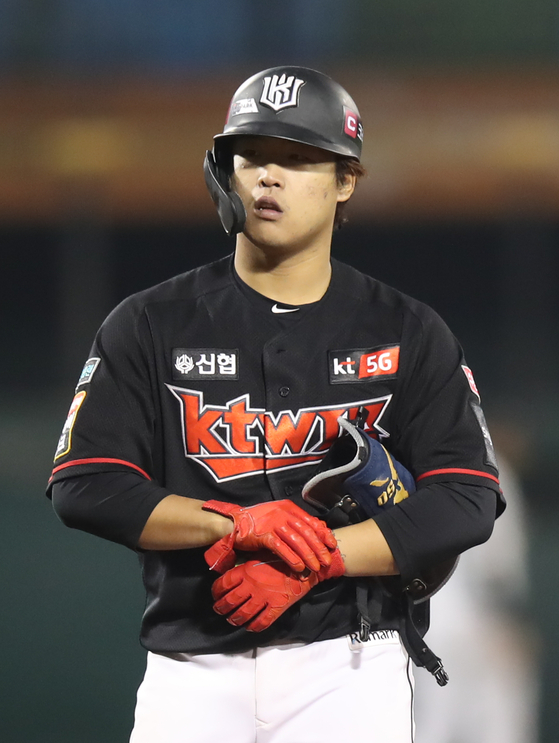 Kang Baek-ho of the KT Wiz reacts after hitting a double durng a game against the Hanwha Eagles on Oct. 30. [YONHAP]


From being the KBO’s Rookie of the Year to winning a Golden Glove, Kang Baek-ho of the KT Wiz has gone through a lot in his three years in the league.

This year Kang's rapid career progression kicked up another gear, with two major changes to his game for the 2020 season.

Right before the start of the season, Kang changed his defensive position from an outfielder to first baseman. Then, starting from June 18, he was assigned as the Wiz’s cleanup hitter.

Prior to June 18, Kang had only had 29 at-bats as a cleanup hitter. Being assigned to the new position gave the young star a huge responsibility.

At the time, the Wiz’s manager Lee Kang-chul explained the decision by saying, “It’s a spot that Baek-ho would have had to take one day.”

At first, Kang struggled. Until the end of June, his batting average was only 0.205 when the Wiz had batters in scoring position. As Kang was given such big responsibility at a young age, the 21-year-old struggled mentally.

From July he clearly started to adjust. In 96 games since July, Kang had a 0.361 batting average while the Wiz had batters in scoring position and his performance at first base started to get better.

As a result, Kang had another successful season, finishing with a 0.330 batting average with 23 home runs and a 0.411 on-base percentage throughout 129 games.

Thanks to his performance, Kang also helped the Wiz advance to the postseason for the first time in the club’s history. The Wiz finished second in the regular season with a record of 81 wins, a tie and 62 losses, earning a direct bye to the second round of the postseason.

Although they faced an early exit by losing to the Doosan Bears, his performance at first base was good enough for Kang to win his first-ever Golden Glove award.

Below are edited excerpts of an interview with Kang.


Q. By winning the Golden Glove award, you’ve earned recognition as the league’s best first baseman. How do you feel?

A. I don’t think I’m the best first baseman. I was able to win the Golden Glove because our team played well. I was really nervous because it was my very first time going to the [Golden Glove] Awards, but I’m really happy that I got to win. I’ll put it next to the Rookie of the Year trophy.


Q. How did you feel when you saw the Golden Glove trophy?

A. Both Rookie of the Year and the Golden Glove were awards that I’d dreamt of. I want to play better [baseball]. I hope to be busier next winter and the year after [attending awards ceremonies].


Q. If you had to pick one, what would you say your biggest achievement was for the 2020 season?

A. I got to spend one season without any major injuries. I want to put a lot of meaning behind that. It was even better because out team not only got to finish within the top five, but even higher. Personally, I’m very satisfied.

There were times when we struggled, but I think it was a well played season. Rather than “must accomplish” goals, a lot of “I would like to experience this one day” kinds of goals were achieved. I’m very thankful for the season.


Q. At the beginning of the season, you struggled when there were batters in scoring position but got significantly better starting in July. What changed?

A. This might sound obvious, but once you struggle, you start getting more pressure. I had a longer-than expected struggle because I had issues with my mental game. At the same time, I gained this certainty inside me that if I could get through it, I could see a lot better results. I’ll be playing baseball next year and for years after. I’ve got a lot of time. I think I had great experience at an earlier age than other players.


Q. Did you feel any pressure after getting assigned as cleanup hitter?

A. I don’t think I was batting poorly because I was assigned as cleanup hitter. I just think I struggled mentally. “I struggled because of the pressure of being the cleanup hitter” just sounds like an excuse to me. Such excuses don’t help at all. I had to accept my struggle and had to work harder to get better. Next year, when this happens again, I’m going to accept it the way it is as quickly as possible and find ways to get myself out of that struggle.


Q. You did a great job in fighting off the pressure during the second round of the playoff against the Doosan Bears. The Wiz lost, but you still had a pretty solid debut as you had a 0.333 batting average with five hits throughout four games in the postseason. How did you prepare?

A. [Lee] Jung-hoo [of the Kiwoom Heroes] told me ahead of the playoffs that since I can get nervous, just focus on the game. When I walked away with no hits in four at bats in Game 1, he called me again and comforted me by saying he also played badly in his first postseason. I was able to feel better and loosen up in my next at-bats.


Q. The 2021 season will be your fourth in the KBO. How do you plan to spend this winter?

A. Right now, all I do is train. I have only one goal for this winter, which is to strengthen my muscles. When I prepared for this season, I lost weight and focused on strengthening my core. This season, I’m planning on bulking up, so I’m going through some intense weight training sessions.