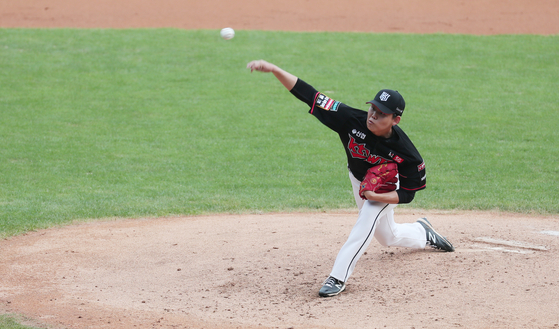 KT Wiz starter So Hyeong-jun throws a pitch during a game against the Doosan Bears at Jamsil Baseball Stadium in southern Seoul on Aug. 16. [NEWS1]


There’s no doubt that KT Wiz high school rookie pitcher So Hyeong-jun has started his pro career on a high note.

Having made his KBO debut right after graduating Yushin High School, So started out his rookie season as a Wiz starter and picked up 13 wins and six losses with a 3.86 ERA throughout his 26 starts.


That performance was good enough to earn him a huge 511 points out of a possible 560 points to win the KBO’s Rookie of the Year award. He finished way ahead of the runner-up, LG Twins’ outfielder Hong Chang-ki, who received 185 points.

Looking at his 2020 season statistics, it's obvious why So earned so many points. His 13 wins is the highest number of wins picked up by a Korean pitcher in the league this season. He is also only the ninth high school rookie, and the first since Ryu Hyun-jin of the Toronto Blue Jays back in 2006, to pick up double-digit wins in his first season.

With So's help, the Wiz finished second in the KBO this season with a record of 81 wins, one tie and 62 losses, good enough to earn their first-ever postseason spot.

In the Wiz’s first-ever postseason game, manager Lee Kang-chul assigned So as starter for Game 1 against the Doosan Bears. Since the Wiz players were young and new to the postseason, the Bears, at the time the reigning champions, were expected to pick up an easy win. That wasn’t the case with So on the mound.

So tossed six and two-thirds scoreless innings. Although the Wiz eventually lost the game 3-2, So’s performance still made headlines.

“I couldn’t find any more words to compliment him,” Lee said. “That’s how good it was. I feel like we’ve found a pitcher that’s good enough to be on the national team. He was so much better than back when I was a player.”

Despite his successful season, there was still one major disappointment for So: Not being able to stand on the mound in front of a sellout crowd.

When So made his first start at Suwon KT Wiz Park on May 8, the stands were completely empty as the KBO started the season playing in empty stadiums because of the coronavirus pandemic.

As the situation didn’t get any better mid-way through the season, the KBO continued its season behind closed doors, leaving the fans to cheer for their teams through live online broadcasts.

For a lot of the high school players, being able to play in front of a sellout crowd is part of the pro baseball dream. But the rookies this season were faced with a completely different story.

Fans did eventually make it back into the stadiums, but in limited numbers and with absolutely no cheering permitted. For So, the biggest crowd he pitched in front of was during that game against the Doosan Bears — Game 1 of the second round of the postseason.

That game had 8,200 fans permitted into Gocheok Sky Dome in western Seoul, 50 percent of the stadium's capacity, as the social distancing level dropped at the time.

Fifty percent is better than nothing, but the crowd was still silent. Every time So picked up a win during the regular season, that success was marred by the silence surrounding him.

“I’m disappointed that I don’t get to hear the fans' cheers," So said. "I’m waiting for the day when the fans can come out to the ballpark.”

Even while collecting the Rookie of the Year award, So said that the most memorable moment of the season for him was the game when the gates finally opened to fans, even if it was a small and silent crowd.

It’s still unclear whether the KBO will return with a sellout crowd for the opening day of the 2021 season, but So is hoping that day will come.

“I hope the Covid-19 situation settles down next year and that I’ll be able to pitch in front of more fans than this year,” So said. “I also hope our team can advance to the postseason again and get to play baseball longer in front of the fans.”

To achieve such a goal, So is determined to get stronger physically for the upcoming season.

“I was pitching well in the beginning of the season, but due to my physical limits, there was a time when I struggled a little bit,” So said. “Thanks to our manager’s care, I was able to take a break and pitch with confidence again in the second half of the season. I’ll get stronger physically so I can play the full season next year.”