Korea's webtoon industry continues to thrive in spite of pandemic

Korea's webtoon industry continues to thrive in spite of pandemic 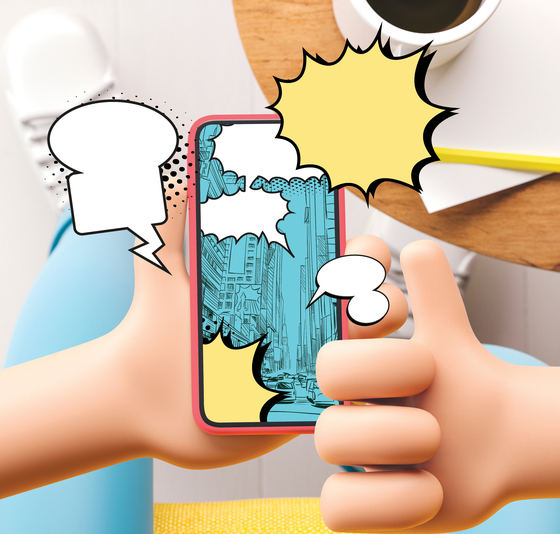 Korea’s webtoon industry continued to grow in 2019 and also the first half of 2020, finding more overseas readership due to increased digital content consumption amid the global coronavirus pandemic, the Korea Creative Content Agency (Kocca) said on Wednesday.

Kocca revealed a report on the findings of a survey it carried out on webtoon companies and webtoon authors. A total of 43 webtoon companies, including both platforms and agencies, and 635 webtoonists were surveyed and interviewed. The results will be used for the betterment of the webtoon industry and setting related policies, Kocca said.

Earlier in the week, Kocca said that the readership of digital cartoons or webtoons increased by 37.4 percent due to Covid-19 with 63.4 percent of survey respondents saying they read webtoons at least once a week.

Wednesday’s report revealed that sales volume of the local webtoon market in 2019 was 640 billion won ($577 million), 173.7 billion won or 37.3 percent higher than the previous year. Of that revenue, 69 percent came from paid content, 16.2 percent from content exported overseas, 4.1 percent from publishing and 4 percent from advertising. The number of new webtoons saw a slight decrease, going from 2,853 in 2018 to 2,767 last year.


Over half of the companies answered that Covid-19 helped boost sales, especially outside of Korea. A total of 60.5 percent of webtoon companies said their local sales increased, and 71.9 percent said their overseas sales also saw a boost. While 37.2 percent of companies said they were looking forward to increased revenue next year, 30.2 percent answered they didn’t think revenue would change. Fifty-one-point-two percent responded that not being able to work on-site was the biggest difficulty they faced due to the pandemic while 46.5 percent chose not being able to launch overseas.

Kocca estimated the damage inflicted by the illegal distribution of webtoons online at 318.3 billion won. According to the agency’s interviews with people who have experience using illegal sites, most people were aware that they were accessing content illegally, but chose to continue because the payments are “pricy.” Many of such users were found to use similar illegal sites for other content consumption, such as films and games, and confessed they will likely continue to do so in the future.

Kocca and the Ministry of Culture, Sports and Tourism have been promoting the “Webtoon user awareness campaign” since 2018 to eradicate illegal distribution and consumption of webtoons. The ministry has also worked with a special police force to shut down 25 illegal webtoon and comics websites and arrested 22 offenders.

Webtoon companies identified 3,438 webtoonists in 2019, of which 1,692 were exclusively signed to certain companies and 1,746 were not. Of the 635 respondents, 60.8 percent were women, 39.2 percent were men and 48 percent of the total were in their 30s. Two thirds of webtoonists said they were active on webtoon-only platforms, such as Lezhin or Kakao Page, and a third said they were active on portal sites Naver and Daum. Most, or 80.5 percent, said they had not revealed their work on social media, while 19.5 percent answered that they had.

Over half, or 69.9 percent, said they worked on both their drawings and storylines, while 11.8 percent they only created the story and 18.3 percent only worked on the drawings. Slightly over half of authors, 52.6 percent, answered they used assistants. Webtoonists worked 5.8 days a week on average, 10.5 hours every day. Their average annual income was 48.4 million won, but only 30.6 percent earned more than 50 million won.

Respondents were asked to choose the three things that were most difficult about their jobs, and the answers were: Deteriorating mental and physical health due to overwork, with 84.4 percent; lack of time to rest and pressure to meet deadline, with 84.3 percent; and economic hardship, with 74 percent.

With authors coming forward in the recent days about having been either tricked or forced into signing unfair contracts or not signing contracts at all, 50.4 authors answered they had experienced such unfairness in contract.

Only 9.4 percent said they signed a contract in the standard form provided by the government. Over half of webtoonists answered that Covid-19 did not pose many problems to their working conditions, but 23.1 percent said they saw less opportunities for new contracts or work, while 4.7 percent experienced unexplained cancellations of contract.

“We will be viewing the results of the survey with related bodies to come up with necessary policies,“ said Kocca. “We have been working with the Culture Ministry to eradicate illegal [webtoon distributing] websites. We will be focusing on that also with the welfare policies for webtoonists in the future.”