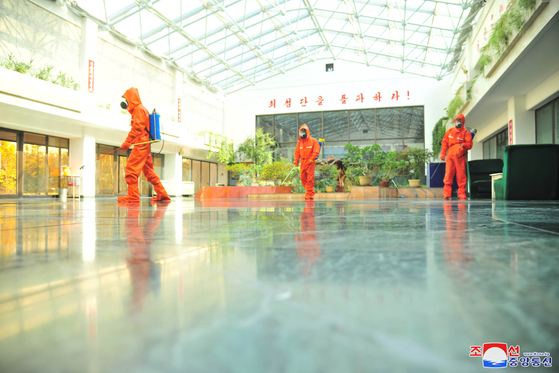 Health workers disinfect a government-run technology institute in Pyongyang on Dec. 16, in this photograph from North Korean state media. [YONHAP]


Anxiety over an uncontrollable coronavirus outbreak ran high in South Korea amid a rapidly growing wave of infections, North Korean state media claimed on Wednesday, amid continued silence from the regime toward Seoul’s overtures on health sector cooperation.

Uriminzokkiri, a state-run outlet in Pyongyang that primarily covers news on South Korea, highlighted growing public criticism in the South toward the government’s antiepidemic response as over 1,000 new Covid-19 cases are discovered each day.

Quoting Yonhap News Agency, among other South Korean outlets, the report further went on to stress that South Korean health authorities’ decision to prematurely dial down the country’s social distancing level in earlier months contributed to the recent upward trend.

By underscoring the South’s latest failures to curb the spread of the virus, the report presented a strong contrast to other state media reports portraying the North’s own struggle against the virus as a well-coordinated operation.

“All sectors and units are waging an intensive drive to firmly consolidate the antiepidemic walls,” said the official Korean Central News Agency in an English-language report Wednesday that urged the public to strictly observe health measures.

For months now, North Korea has been doubling down on its efforts to fight the virus, despite claiming it has had no confirmed Covid-19 cases on its soil.

According to the World Health Organization’s regular regional situation report for the pandemic released on Monday, the country reported that 10,960 people have been tested for the virus, but none have been found positive.

Borders have been tightly locked down and inspections ramped up as the country wrapped up its so-called 80-day “battle” to meet economic goals before an all-important ruling Workers’ Party Congress is held in January.

Seoul’s inter-Korean officials perceived the situation as an opportunity to thaw the strained relations between the countries by proposing cooperation in the health sector and offering equipment and materials to aid Pyongyang in its virus fight.

Minister of Unification Lee In-young even went as far as to say South Korea should share its vaccines and other Covid-19 treatments with the North for the sake of health security across the entire peninsula.

Remarks to that effect from Lee on Tuesday, however, generated backlash among a South Korean public anxious about their own access to vaccines. The government has been criticized as slow to secure doses from foreign drug makers like Pfizer or Moderna.

Pyongyang for its part made no reply to Lee’s comments either that day or earlier in November. But the regime’s attitude could be gleaned from an editorial in the state-run Rodong Sinmun last month which claimed it had no intention to “kill our children by looking beyond the border for materials we do not need to survive.”