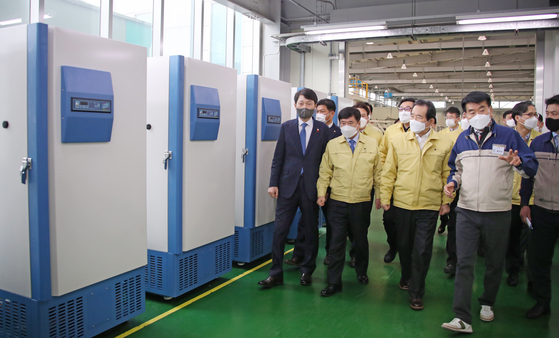 The Korean government will open 250 Covid-19 vaccination sites this year as the first batch of doses are expected to arrive in coming weeks, the Ministry of Interior and Safety said Thursday.

Park Jong-hyeon, an official in the ministry’s spokesperson’s office, told reporters that the ministry was working with local governments nationwide to find 250 spots suitable for distributing Covid-19 vaccines. Each district, county and city will have at least one vaccination site, and for those with populations above 500,000, there will be three vaccination sites, Park said.

Each vaccination site is expected to be visited by up to 3,000 people a day, which is why officials are trying to find spots that have good “natural ventilation” and spaces to wait in, Park said, adding they also must be convenient to get to in terms of transportation and large enough for visitors to socially distance from one another.

Around-the-clock, sub-zero storage facilities will also be a must.

Up to Wednesday, local governments “submitted a total of 150 candidates [to the ministry] to use as vaccination sites, including 93 indoor stadiums, 30 performance centers and cultural facilities, 12 medical centers as well as 10 unused lots of land, parks and fields,” said Park.

Park said the ministry will accept candidates through Friday and vet them with the Korea Disease Control and Prevention Agency (KDCA) before making a final decision early next week. 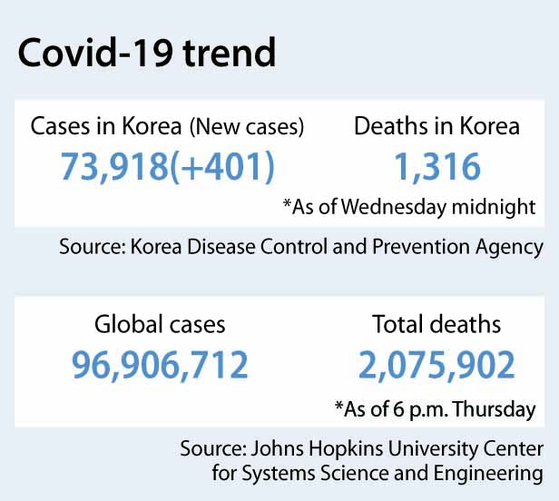 In terms of storage, Covid-19 vaccines will be kept at about 10,000 medical centers across the nation, Park said, chosen from some 20,000 facilities that currently keep influenza vaccines.

The comments came as the KDCA announced Korea added 401 new patients Wednesday, down from 404 the day before. Most cases were from Seoul and the surrounding province of Gyeonggi.

Daily cases have drastically fallen these days from the Christmas Eve peak of 1,241, but health authorities Thursday warned against complacency, saying cases haven’t fallen enough for the greater Seoul area — Seoul, Incheon and Gyeonggi — to be lowered to Level 2 on the five-tier social distancing scheme.

Covid-19 vaccines arriving in Korea will help the nation create herd immunity and hopefully lower infections, but even then, Health Minister Kwon Deok-cheol said in a New Year’s press conference Thursday that some sort of social distancing measures will have to stay in place.

Korea’s first batch of Covid-19 vaccines could arrive in early February from the Covax facility — a global Covid-19 vaccine allocation plan — and be enough to inoculate 50,000 people, Prime Minister Chung Sye-kyun said Wednesday. Details are still being discussed, but if the shipment does arrive, medical workers will be the first to receive the shots, he said.

Among 401 people who were diagnosed with the coronavirus Wednesday, 380 were due to domestic transmission, KDCA data showed.

The remaining 21 cases were imported — eight from the United States, two each from Hungary and Egypt and one each from Indonesia, Myanmar, Sri Lanka, Britain, Romania, Germany, Turkey, Serbia and Mozambique.

Sixteen patients died, raising total deaths to 1,316, while 666 patients recovered, bringing total recoveries to 60,846. As of Wednesday at midnight, Korea had counted 73,918 coronavirus cases in all.