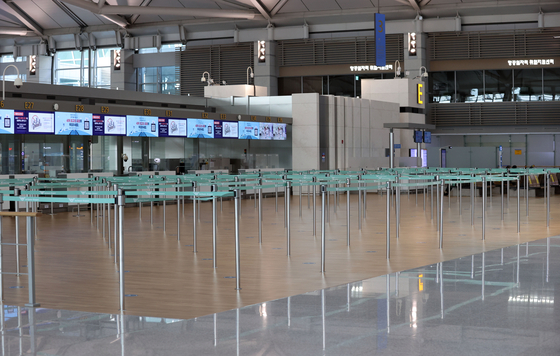 Incheon International Airport’s Terminal 1 is eerily empty Sunday as Korea and countries across the globe see a spike in new Covid-19 cases. Some countries have been enforcing stricter travel restrictions amid reports of new coronavirus variants first detected in Britain and South Africa. [YONHAP]


The Korean government stopped short of raising the social distancing measures to the highest Level 3 Sunday, instead extending the current scheme through Jan. 3 as the country saw new Covid-19 cases near the 1,000-mark Saturday.

The Central Disease Control Headquarters said that the government will maintain the current Level 2.5 measures, the second highest in the country’s five-tier social distancing system, set to run through Dec. 28 by another six days in the greater Seoul area, which includes Incheon and Gyeonggi. The government will also extend the Level 2 measures in areas outside greater Seoul to Jan. 3.

The government has been reviewing whether to raise current social distancing guidelines to Level 3, and noted that some of the restrictions already in place are stricter than Level 3 measures.

A restriction prohibiting people from holding social gatherings of five people or more went into effect last Wednesday in greater Seoul and is set to run through Jan. 3 to curb infections over Christmas and the holiday season. The same rule was applied to people outside the metropolitan area eating in restaurants from Thursday.

The government said it will restrict fast food restaurants, bakeries and brunch cafes to take-out service for customers ordering drinks and desserts, the same restriction put on coffee shops. After coffee shops were restricted, people flocked to places like fast food chains to drink coffee and chat.


Singing rooms, and indoor sports facilities such as fitness centers, golf driving ranges and pool halls will be required to shut down, in addition to bars. Hagwon, or cram schools, are to remain shut during this period.

Large supermarkets, department stores, theaters, PC rooms, salons, arcades and amusement parks are among businesses that have to close by 9 p.m.

New Health Minister Kwon Deok-cheol said in a press briefing Sunday afternoon, “While the trend of rapid spikes in cases has been blunted somewhat, the situation continues to remain serious as there is no clear sign of reversal [of the trend].” 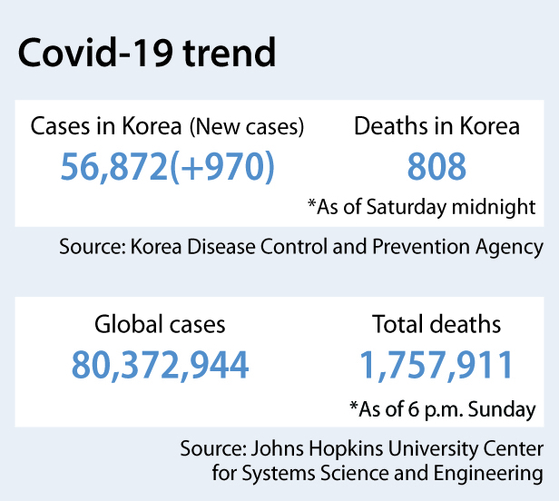 Korea reported 970 new coronavirus cases as of Saturday midnight, of which 946 were local infections and 24 imported, according to the Korea Disease Control and Prevention Agency (KDCA). This brings total Covid-19 cases to 56,872.

There were 15 additional fatalities reported, raising the total death toll to 808.

This was a slight drop in coronavirus cases from 985 patients on Wednesday, a daily record of 1,241 on Thursday and 1,132 on Friday. However, fewer Covid-19 tests are conducted over the weekend.

There was an average of 999 domestic cases in the past week, according to the Central Disease Control Headquarters Sunday, and a weekly average of 690 in the Seoul metropolitan area.

Prime Minister Chung Sye-kyun said in an interagency coronavirus response meeting earlier Sunday, “The special measures that we are already implementing include quarantine policies that are even tougher than that of Level 3 social distancing.”

He added, “The key to containing the spread of infections is for each of us to properly put into practice social distancing regulations in our daily lives."

Members of the ruling Democratic Party (DP), government and Blue House held a meeting to discuss virus responses and an additional coronavirus emergency relief package, including grants of up to 3 million won ($2,700) to small business owners. They also addressed public concerns about vaccine procurement and when inoculations will begin.

Noh Young-min, the presidential chief of staff, said during the meeting at the National Assembly that the first doses of Covid-19 vaccines will be given in February to medical workers and the elderly.

He said Korea has obtained enough doses and the inoculation of the general public will begin in the second quarter of next year.

“Countries across the world are expecting to begin vaccinating the public in the second quarter of next year,” said Noh. “We expected to begin inoculations of our people in a similar period.” Countries like the United States, Britain and Canada have already begun administering Covid-19 vaccines, while in Asia, Singapore received its first vaccine shipment last week.

Noh added, “We expect herd immunity to come at a similar time frame or earlier than other countries. The government is putting forth all efforts to speed up this time frame.”

Prime Minister Chung said that Korea will secure Covid-19 vaccines for 46 million people or about 90 percent of the Korean population, noting this is higher than the 44 million the government initially intended to procure.

The government in late November signed a deal with AstraZeneca for 20 million doses, enough for 10 million people.

Next month, the government plans to ink additional deals with Moderna and also through Covax Facility, a global Covid-19 vaccine allocation plan. Each deal would supply enough doses to vaccinate 10 million people.

AstraZeneca's vaccines will be first shipped around February and March, followed by Janssen's in the second quarter of 2021 and Pfizer's in the third quarter, according to health officials.

The Ministry of Food and Drug Safety said Sunday it will shorten the period of the standard licensing procedure for Covid-19 vaccines and treatments to as low as 40 days from the current 180 days.

An approval process for a vaccine before it is distributed and sold usually takes two to three months, but the ministry said it also plans to shorten the process to as low as 20 days.

The major drug makers have expressed confidence that their Covid-19 vaccines will be effective against the new coronavirus variant detected to be rapidly spreading in Britain.

A Korean man in his 80s who recently returned from Britain posthumously tested positive for Covid-19, health officials said Sunday. Health authorities are checking to see if he had the new Covid-19 variant spreading in Britain, which according to a preliminary study is up to 70 percent more transmissible than other strains. The KDCA said results will be out in early January.

Health authorities have said that there have been no reports of the new variant in Korea so far.

The elderly man, who had a pre-existing heart condition, had been under a two-week self-quarantine at his home in Goyang, Gyeonggi, after arriving from Britain on Dec. 13. He died Saturday morning at a hospital in Ilsan, Gyeonggi, after experiencing cardiac arrest and was later confirmed to have tested Covid-19 positive.

Two family members of the man were also confirmed coronavirus positive Sunday, said health authorities. The man’s wife is awaiting test results. The three family members also recently arrived from Britain, one on Nov. 8 and the other two on Dec. 13.

Since last Wednesday, Korea suspended flights from Britain through the end of the year.

The KDCA said Saturday in response to the Covid-19 mutation from South Africa that those flying in from that country will have to undergo another coronavirus test at the end of a 14-day quarantine period. There were 191 arriving passengers from South Africa in December, with six confirmed Covid-19 cases.

Countries including Japan, France, Spain and Canada have reported cases linked to the new variant first detected in Britain. Japan, also facing a surge in cases, from Monday midnight will ban entry of most foreigners through the end of January. Korea is one of 11 countries with a fast-track entry system for essential business travelers with Japan, which will be maintained. Japanese nationals and foreign residents will no longer be exempt from 14-day quarantine, but must show a negative Covid-19 test from the past 72 hours ahead of arrival.

Of the new domestic cases, the KDCA said 359 were in Seoul, 237 in Gyeonggi and 60 in Incheon. But there were cases reported in all 17 major cities and provinces, including 55 in South Chungcheong, 44 in South Gyeongsang, 40 in Busan, 32 in North Gyeongsang, 23 in Gangwon, 21 in Daegu and seven in Jeju.

The Central Disease Control Headquarters said that the infection routes of 28.5 percent of Covid-19 cases cannot be traced, while clusters related to nursing homes, child care centers, churches and correctional facilities continue to be reported.

So far, a total of 528 cases are linked to the Seoul Dongbu Detention Center in Songpa District, southern Seoul, with eight new patients added as of Sunday. This includes 486 inmates, 21 staff and their family members. Former President Lee Myung-bak has been serving a prison sentence for corruption at this facility.

This marks the fourth largest cluster reported in Korea since the outbreak of the pandemic, following 5,214 cases linked to the Shincheonji cluster originating in Daegu, 1,173 to the Sarang Jeil Church in Seongbuk District in central Seoul and 650 to an antigovernment rally in central Seoul in mid-August.

Inmates at the Dongbu Detention Center infected with Covid-19 will be transferred to a correctional facility in Cheongsong, North Gyeongsang, which has been designated a coronavirus treatment center. 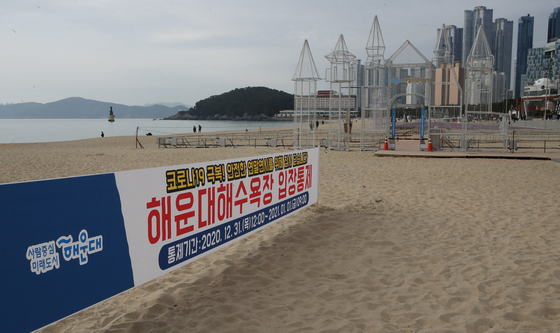 Haeundae Beach, pictured Sunday, will be closed off from noon Dec. 31 to 9 a.m. on Jan.1 to discourage people from entering to celebrate New Year’s Eve as the government maintains strict social distancing measures to curb yearend gatherings. The Busan city government said it will be closing seven beaches and public parks over New Year’s Eve. [SONG BONG-GEUN]