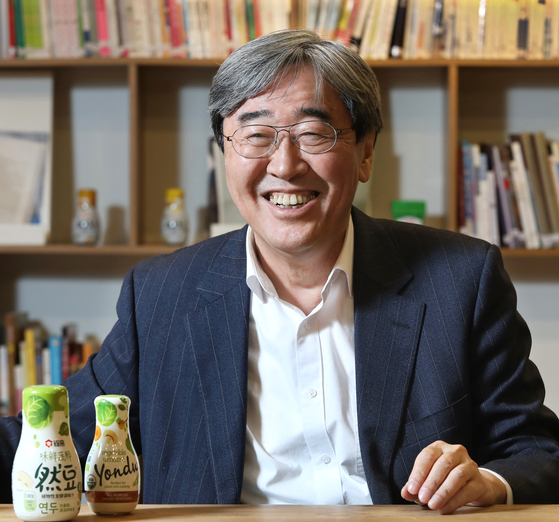 Sempio Foods CEO Park Jin-sun during an interview with the Korea JoongAng Daily at the company's headquarters in central Seoul on Dec. 21. [PARK SANG-MOON]


Sempio Foods has been the market leader in the soy sauce industry over the decades since it was founded in 1946. But CEO Park Jin-sun says the company is more than just a soy sauce maker. He says Sempio is a firm that is centered on innovation and creating things that don't yet exist.

Before Park became CEO and president in 1997, Sempio was just another mass manufacturer of factory-made food products. The management style has changed under Park’s leadership to creating differentiated products through research and development (R&D). Sempio invests 5 percent of its sales in R&D to create fermentation technologies and study traditional Korean ingredients, which is much higher than most food companies.

One outcome of that extensive R&D is Yondu, a cooking essence based on Chosun Ganjang. The product was recognized at the Food and Beverage Awards, the U.S.-based National Restaurant Association Show’s annual celebration of the year’s tastiest, most creative and marketable food and beverage products.

Last month, Park was awarded the Gold Tower Order of Industrial Service Merit, the highest government honor at the Middle Market Entrepreneur's Day last month, for his contribution in spreading Korean food overseas and his expertise in R&D. The honor came two decades after his late father Park Seung-bok, the former Sempio chairman, received the same award for his contribution to the development of the food industry.

Park Jin-sun received a bachelor’s degree in electrical and electronics engineering at Seoul National University and a master’s in the same field from Stanford University. He switched his major to philosophy at The Ohio State University’s doctoral program.

Since his appointment as Sempio CEO and president in 1997 through last year, the company’s sales almost quadrupled and its net profit skyrocketed more than 20-fold, according to Sempio. Its annual sales last year were 280.81 billion won ($254.7 million) and its net profit was 26.82 billion won. The number of employees has increased more than threefold to 700 during the same period.

Under Park, Sempio commercialized Chosun Ganjang, pioneered the premium doenjang market and is gaining global recognition from Yondu, with more products scheduled to be released next year in celebration of its 75th anniversary.

“Something that doesn’t exist in this world — that’s what we are making,” said Park during an interview with the Korea JoongAng Daily in central Seoul on Dec. 21.


Q. What do you mean you are making something that doesn’t exist?

A. There was a time when products were sold as they were made. Up until the 1990s, Sempio took that strategy and focused on mass production. All that was required was to make products and deliver them to sellers. But that way of operation doesn’t work anymore.

The scale of supply has grown larger and the types of products have become more diversified. For the same level of products, consumers opt for cheaper products. So unless a company can offer the cheapest price, it should bring out something that doesn’t exist to get chosen by customers. Packages can be renewed easily, but not the content inside those packages. Content is made based on R&D. It requires time, but continued investment is necessary.


Q. Sempio spends a lot on R&D for a food company. Why is that?

A. Food companies typically invest around 0.5 percent of their annual sales on R&D, but we inject five percent.

I was planning to live in the United States before returning to Korea to work for Sempio. But I changed my mind after thinking that Sempio may not last much longer if it continues to focus on production quantity instead of product quality. That’s the reason I returned.

Sempio succeeded in commercializing Chosun Ganjang after four years in 2001.


Q. Sempio opened a costly research center in 2013. Was the investment worth it?

We study microorganisms. We are studying which microorganisms to use to create what we want. It’s basically bio. We have built knowledge in microorganisms that generate certain tastes. Our focus now is to make natural food products, but it could expand to something that isn’t directly related to taste if our capacity increases.

Q. What would you say is a major accomplishment of that intensive R&D?

A. Definitely Yondu. It was made around 10 years after Chosun Ganang was developed at Sempio. It has the taste of a soy sauce that has been fermented for 10 years. Using bio technologies, it takes us six months.

Yondu has been developed to have a less strong taste than Chosun Ganjang to make it more appealing to foreigners and the younger generation. It has received awards inside and outside Korea and has received approval from overseas chefs.

Since it is a 100-percent bean-based product, it is popular among vegans. Yondu sales in Korea have been growing and we plan to properly market it overseas. I personally think Yondu is good enough a product to generate a trillion won in sales alone. 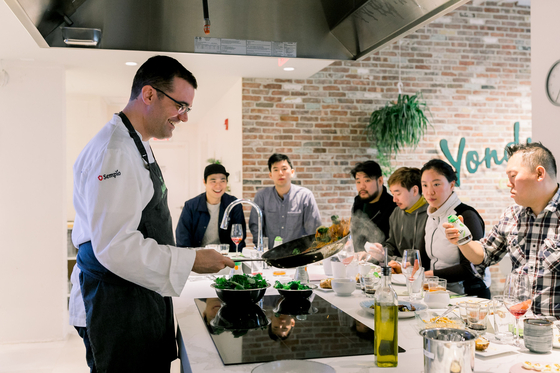 
Q. How far do you think Korea has come in globalizing Korean food?

A. I’m still not sure what globalization is or its purpose. The base of globalization of Korean food is the idea that Korean food is good, and there’s a sense of proudness. I think spreading Korean food is a form of cultural exchange. It’s providing an opportunity to those that are not familiar to enjoy something new, but not necessarily saying that ours is better.

To promote the globalization of Korean food, restaurants have to serve good food. Foreigners would rarely eat what they are not used to, but when they do, they should feel that the food is delicious. [Sempio’s] role is to help restaurants provide that opportunity — not by spreading recipes, but by setting the foundation [through our products]. The level of food at restaurants first needs to be upgraded.

A. There isn’t a specific purpose for providing education. I just hope more people understand food. Sempio’s role is to help make cooking at home easier, healthier and more delicious. Over the past years, Sempio has been studying ingredients, ranging from vegetables to mushrooms and marine plants. Sempio has also been hosting a campaign designed to spread the value of food cooked at home since 2013 because the company believes having meals with family plays a crucial role in building children's health and emotions.


Q. Sempio is known for providing a good workplace environment for employees. Since the company's establishment in 1946, there has never been a conflict between the company and the labor union. What’s the secret?

A. When evaluating employees, my focus is on the level of concentration they pay and what they did, not the sales performance. Most companies set sales goals when it comes to planning the company goals for next year. I think sales goals are meaningless because situations always change. Companies should clarify what they can do, find ways to do it well and predict an outcome.

I like cooperative and humble people over competitive people. In the short run, competitive employees may generate a better performance, but not in the long run. Those types of people end up ruining something while trying to stand out from others. Neither success nor failure is a result of one person’s performance. Unless employees failed intentionally, it’s okay to fail as long as one can look back and learn why that negative outcome was generated.

The labor union is aware of my honesty. We’ve never suffered a conflict because of the mutual trust. Sempio’s core values are the happiness of people, contribution to society and diversity of cultures.

A. Our sales increased as interest in cooking at home improved. Also, the sale of Fontana’s HMR soup introduced earlier this year did very well. It sold five times more than our marketing division and twice more than I had expected.

In May, Sempio had an employee from the headquarters who tested positive for coronavirus. When that happened, I sent flowers to every employee at the firm to offer comfort to them.


Q. Sempio celebrates its 75th anniversary next year. Are there any plans to celebrate?

A. We plan on introducing sauces that can shorten the time spent on cooking. It would be like a cooking solution that reduces the injected effort while pulling up the taste. The goal is to help parents and kids cook together.

The 75th anniversary is expected to be a new year for Sempio to show a different side. A lot of people have a stereotype of Sempio [as a soy sauce maker]. We wish to appeal to the younger generation that is not that used to cooking through our upcoming products. The series of products will be released starting in March.

We may face a world where artificial intelligence suggests cooking ideas for humans or even cooks in the future. Sempio is preparing for that era.