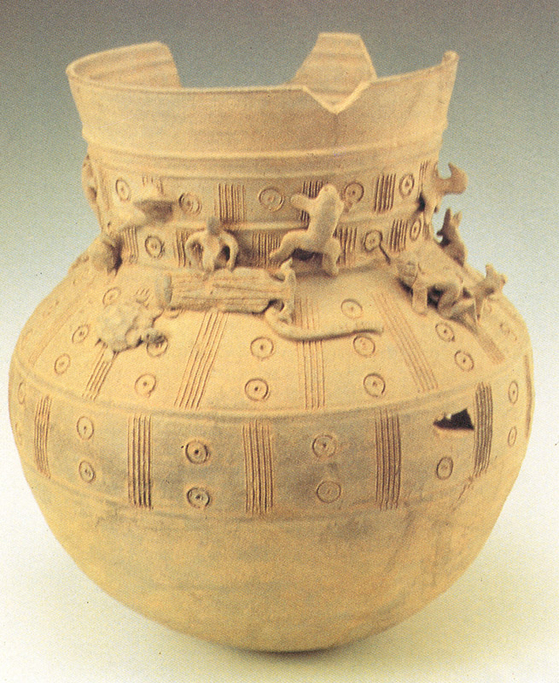 This doll is called tou (a doll made of clay) in Korean.

Tou often represents the shapes of various animals, daily necessities, houses and people. There are multiple purposes for tou — a toy, for sorcery or for burial.

Though almost all of them were made from clay, some were made of bones, horns and even twigs.

The first letter ‘to’ means clay or earth, and the last letter ‘u’ means a doll.

A long-necked jar decorated with clay figurines discovered in Tomb No. 30 alongside Gyerim-ro is 34 centimeters tall and 22.5 centimeters in diameter at the mouth.

Another long-necked jar was found in Tomb No. 11 in Nodong-dong Village.

As for the characteristics of the Long-necked Jar from Tomb No. 30, there are four prominent stripes on the neck. It is round on the bottom and forms a pout near the mouth. There are five lines on the body. The body is divided into upper and lower parts. Tou celebrate life: a man and woman engaging in sexual intercourse, animals such as rabbits and snakes and a pregnant woman playing a traditional Korean instrument.

These figures are attached to the jar's neck and shoulder area.

Though damaged when discovered, this jar has been fully repaired to its original state.

As for the characteristics of the Long-necked Jar from Tomb No. 11 in Nodong-dong, the mouth of the dish projects outward a little. The neck is divided into two parts in terms of projective lines. Five waves of lines are engraved on the neck. The waves of lines are on the body as well. There are fewer dolls decorating the jar than on the one mentioned above, although the shape of the body is nearly the same.

The dolls were produced and used to fend off evil spirits.

However, their simple yet emotional forms have given these dolls artistic value and historical meaning in addition to their religious use.