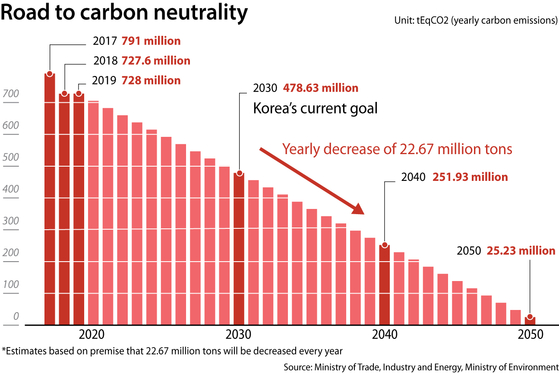 Domestic oil refiners have been shaken by the Moon Jae-in administration’s goal of reaching carbon neutrality by 2050.

President Moon stated the administration’s vision for 2050 in a live broadcast from the Blue House on Dec. 10.

“Carbon neutrality is an opportunity for Korea to make the leap to become a leading nation,” Moon said.

Moon said he would focus the government’s policy efforts on achieving carbon neutrality by 2050. Carbon neutrality is achieved when total carbon dioxide emissions are offset by measures such as expansion in renewable energy. The government's goal is to reduce the carbon footprint every year and gradually reach zero by 2050.

But already the oil refining industry is complaining that it wasn't consulted. It is rare for that industry, which is regulated by the government and affected by its policies, to openly express complaints.

“The oil refiners know better than anyone that it is difficult for the country to go against the trend of carbon neutrality, but the government’s road map for achieving it by 2050 is impossible,” said a spokesperson for a local oil refiner, who asked not to be identified.

Hyundai Oilbank was the first among local oil refiners to disclose its own carbon reduction goals. In September. Hyundai Oilbank announced that it would reduce carbon emissions to 4.99 million tons by 2050, around 70 percent of the current amount. Last year, the company had 6.78 million tons in emissions.

Due to the government’s stated plans, however, that goal will need to be changed.

Some say that Moon’s announcement was hasty and didn't take into account that petroleum products are around 12 percent of Korea's total exports. According to the Korea International Trade Association (KITA), exports of diesel fuel were $15.3 billion in 2019, making them the fourth largest export category. Jet fuel exports amounted to $8.8 billion last year and gasoline $6.4 billion. The only export categories that are bigger are semiconductors and automobiles.

“The oil refinement facilities in the country rank fifth in the world and are highly competitive,” said a spokesperson for Korea Petroleum Association. “Since petroleum products take up a considerable proportion of Korea’s exports, the government should not blindly push its carbon neutrality goals, but rather think of measures needed to maintain Korea’s competitive edge in exports.”

Through the coronavirus pandemic, oil refiners have racked up big losses. New regulations targeting oil refiners have piled up: One proposed amendment to the local tax law will charge 1 won of tax for every liter of petroleum product produced to cover pollution and health threats caused by the industry. The legislation was introduced by the Public Administration and Security Committee and is being discussed at a standing committee.

“It feels like the oil industry has been stabbed in the back, when it is already suffering due to the coronavirus pandemic,” said a source in the oil refining industry.

Energy analysts say that oil refiners’ achievement of carbon neutrality is impossible without support from the government.

“Closing down oil refiners is the only way of achieving carbon neutrality with the current status of the industry,” said Yoo Seung-hoon, a professor of energy policy at Seoul National University of Science and Technology. “The government needs to develop technology to capture carbon with low costs and distribute it to the public, and then establish infrastructure for further use.”