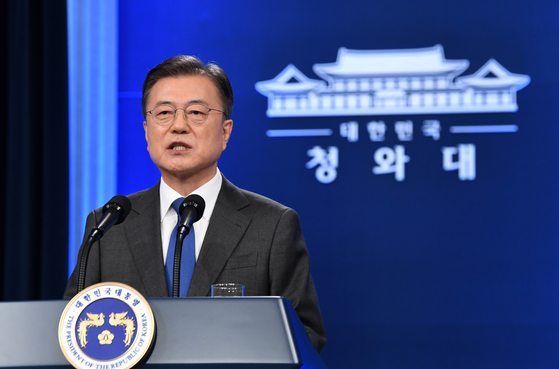 President Moon Jae-in said Korea is getting a jump on the race to achieve carbon neutrality.

“Carbon neutrality is an inevitable task which humanity must push forward together,” Moon said during a Blue House press conference in Seoul on Monday. “The government has reduced the number of coal-fired power plants earlier than originally planned and has increased the importance of renewable energy such as solar and wind power.”

During the event held to mark his four years in office, Moon also emphasized that the country has been accelerating the transition into a hydrogen economy.

“Partnerships between public and private sectors have been strengthened to accelerate the energy transition by industries,” Moon said. “All sectors of the society including power generation, manufacturing, transportation, buildings and urban infrastructure have been laying out a roadmap that aims to meet carbon neutrality.”

“The government will make 2021 the first year of Korea’s drive toward carbon neutrality,” Moon added. “The transition to a low-carbon economy is not just an eco-friendly policy. It will serve as a great opportunity to create new technologies and industries, as well as create many new jobs.”

Moon vowed to exert all efforts to achieve a GDP growth rate of 4 percent, saying all Korea’s economic indicators have been pointing to a recovery trend.

“Exports up to April of the year hit a record high, and investments in equipment are increasing at rapid pace. Consumer spending has revived, and economic sentiment has improved to pre-Covid levels,” Moon said. “All government capabilities will be mobilized and private sector vitality will be improved so that our economy will grow more than 4 percent.”

“The government will actively support preemptive investments for companies and, in particular, will do everything to report the best figures in exports.”