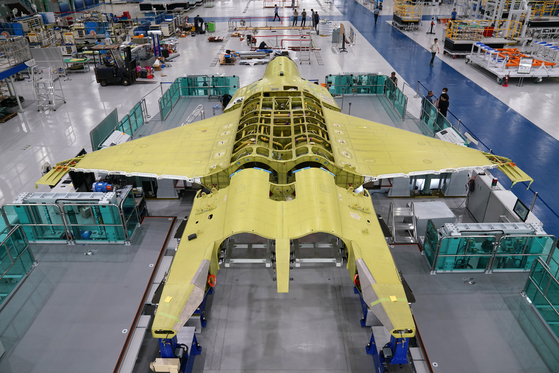 Assembly work is underway on the KF-X, Korea's first indigenous fighter jet jointly developed with Indonesia, as shown in a photograph from the Defense Acquisition Program Administration. [NEWS1]


Korea’s ambitious indigenous fighter jet project may end up costing taxpayers much more than they bargained for, as its partner Indonesia toys with pulling out from the program altogether.

Total development costs have been estimated to be around 8.5 trillion won ($7.8 billion), of which 1.6 trillion won, or 20 percent, is to be paid by Indonesia under a joint partnership contract the two countries signed in 2016.

Led by Korea’s sole military aircraft manufacturer, Korea Aerospace Industries (KAI), the project aims to produce 125 jets for Korea and 51 jets for Indonesia by 2026. Currently a prototype is under assembly, while a maiden flight for the plane is scheduled for 2022.

Yet the slow pace of the project has reportedly generated displeasure in Jakarta, where demand for a latest-generation aircraft has grown amid China’s aggressive challenges to its claims over territories in the South China Sea.

With Covid-19 further hampering the project and tightening purse strings, Indonesia has signaled its discontent by apparently holding back from further financial commitments.

According to Rep. Shin Won-shik of the opposition People Power Party, Indonesia has only paid 227.2 billion won out of the 831.6 billion won it promised for this year. The payment made by Jakarta so far only covers around 13 percent of its commitment.

In addition to the withheld payments, Indonesia did not send back the 114 technical specialists from its aerospace firm PT Dirgantara Indonesia, who were repatriated in March due to outbreaks of the coronavirus in South Korea.

According to one Korean government source, Indonesian officials asked for a renegotiation of the initial deal on the KF-X, asking for more technology transfers in exchange for its commitment, as well as a reduction of its burden from 20 to 15 percent.

No deal was reached, and negotiations remain ongoing, the official said.

But the delay could cost Korea its partner altogether. Indonesia is reportedly close to reaching an agreement to purchase 48 Rafale jets as part of a comprehensive defense cooperation deal with France.

The offers put out by France, which one Korean defense industry source said included a much larger transfer of fighter jet technologies, has enticed Indonesia, and according to French publication La Tribune, the two countries are close to a deal.

“The KF-X is a fighter jet that currently exists only on a blueprint, but the Rafale is a jet in operation,” the source said. “For Indonesia, [outfitting its air force with the French jets] may be a deal worth pursuing even if it means relinquishing 227.2 billion won.”

The Korean government, however, insists that even with Indonesia’s complete withdrawal from the project, the KF-X project will continue as planned.

The biggest issue would be making up for the investments that Indonesia promised with Korean taxpayer money. The loss of the 51 jets promised to Indonesia would also reduce overall production quantity and thus drive up per-unit costs, potentially harming export prospects for the jets.

Government officials in Seoul, however, have been cautious about drawing conclusions about Indonesia’s intentions. When asked by Rep. Shin whether Jakarta seemed to be poised to back out of the KF-X deal during a parliamentary hearing in October, DAPA Minister Wang Jung-hong said Indonesia will not “buy anything and wait out until the KF-X is completely developed.”

The agency also told Shin in a separate reply that current press reports did not reflect Indonesia’s official position on the matter, and that any military deal it was pursuing “appears to be going forward independently of the KF-X joint development” project.