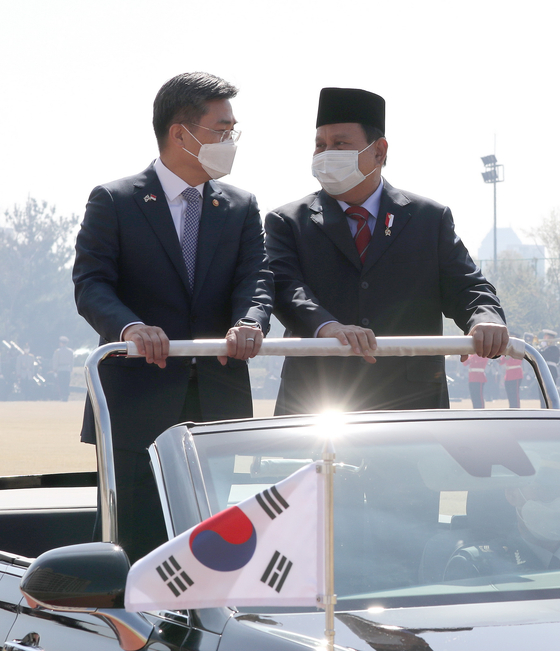 The Indonesian defense minister is expected to attend a rollout event for a prototype of the jet, developed by Korea Aerospace Industries, which will be held at 2:30 p.m. on Friday at KAI's production facility in Sacheon, South Gyeongsang.

During their meeting at the Blue House, Moon welcomed Prabowo's visit as a sign of Korea and Indonesia's joint commitment to produce the KF-X jet.

"Now that the development of the next-generation fighter jet has succeeded and the prototype is complete, I believe the Indonesian defense minister's visit to Korea to attend the rollout event demonstrates the two countries' determination to ensure the success of our mutual cooperation in defense technology," Moon said.

Moon also expressed his hope that Korea and Indonesia would work together on production and military technology transfers to advance their mutual defense and security in the future.

Indonesia is a stakeholder in the jet's development, dubbed the Korea Fighter Experimental (KF-X) project, having committed to finance 20 percent of the new fighter jet's 8.8 trillion-won ($7.9 billion) development cost.

Aimed at building the first domestically developed fighter jet, the KF-X project has been called the most expensive military project in Korean history, with a price tag of approximately 8.5 trillion won ($7.8 billion) for development alone.

Approximately 1.6 trillion won, or 20 percent, is to be paid by Indonesia, which will eventually receive 50 out of a total 170 jets.

The group's attendance signals that Indonesia remains committed to the development of the KF-X despite rumors that the Jakarta was trying to quit the joint venture.

Jakarta has been reported to be impatient with the protracted timetable of the jet's development, as the Southeast Asian country faces rapidly mounting security concerns over China's expansion into the South China Sea.

Indonesia's air force chief announced Feb. 17 that Jakarta will buy 36 Dassault Rafale from France and eight F-15EX jets from U.S. arms maker Boeing. The announcement prompted the Korean Defense Acquisition Program Administration (DAPA) to issue a statement on Feb. 21 that the purchases were unrelated to Indonesia's commitment to the KF-X development project.

DAPA records submitted to the National Assembly in February showed Indonesia has only paid 227.2 billion won in three early installments out of the 831.6 billion won it promised for the development thus far.

In addition to the withheld payments, Indonesia has still not sent back the 114 technical specialists from its aerospace firm PT Dirgantara Indonesia, who were repatriated in March due to the coronavirus outbreak.

A major item on the talks between Prabowo and South Korean officials, which Prabowo called "constructive," is the resolution of Indonesia's unfulfilled payments for the KF-X project.

In a sign of the importance of the KF-X project on the visit's agenda, DAPA chief Kang Eun-ho attended the defense ministers' talks today.

Kang visited Indonesia in March to attend the delivery ceremony of a third Korean-made 1,400-ton submarine, which Indonesia contracted in 2011.

Indonesia signed another agreement with Korea in 2019 to purchase three additional submarines, but that project has made little headway.

Despite the hurdles of the KF-X project, Indonesia in recent years has become the largest importer of Korean-made defense products.

Peeking at the prototype