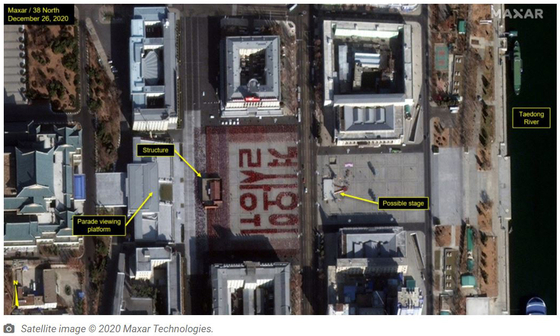 A rehearsal is underway in Pyongyang's Kim Il Sung Square in this satellite photograph, uploaded by monitoring group 38 North. Participants hold up red placards which, in a formation, spell out a phrase that means "defend with one's life." [SCREEN CAPTURE]


Rehearsals for an upcoming major party congress in January appear to be underway in Pyongyang, according to a U.S. research group monitoring North Korea.

Satellite imagery published by the monitoring website 38 North showed thousands of people gathered in Pyongyang’s central Kim Il Sung Square Saturday, presumably practicing for a parade to be held at the 8th Party Congress next year. The website is run by the Washington-based think tank Stimson Center.

The crowd held up red placards in a formation that spelled a Korean phrase translating to “defend with one’s life.” Political messages displayed in such ways “are common during this kind of event and require practice to perfect timing and accuracy,” 38 North noted.

The website further pointed out an unidentified structure had also been installed in the western side of the square surrounded by a high barrier, around which the rehearsals are taking place. A second stage-like structure facing the first has also been erected, possibly for use during an expected New Year’s Eve concert annually held in the square, 38 North added.

Such preparations, which take place amid heightened alert levels in the country due to the Covid-19 pandemic, highlight the importance of January’s congress for the regime after a year of economic throttling from sanctions, natural disasters and the coronavirus.

For months now, the country has been waging an 80-day so-called “battle,” asking the public to mobilize and eke out economic results ahead of the congress, hoping for some semblance of achievement during the important event.

With the campaign drawing to a close with the year’s end, the North’s propaganda machine is hard at work promoting slogans of self-reliance to overcome the current difficulties.

One editorial from the Rodong Sinmun, the official newspaper of the ruling Workers’ Party, noted Monday that “nobody will help us and nobody wants [North Korea] to become strong and prosperous,” so the “only reliable thing is one’s own force.”

Speculation has also been growing as to when the congress is to take place, given Jan. 8 is North Korean leader Kim Jong-un’s birthday and therefore another major occasion for official commemoration.

Experts in Seoul say this likely means the regime will kick off the congress sometime between Jan. 2 and 5, then wrap up events with a bang through a parade or mass games on Kim’s anniversary on Jan. 8 — hence the continued preparations.

Also piquing the interest of North Korea watchers is whether Kim will deliver his usual New Year’s address this year, as he has done nearly every year since 2013.

Such speeches, which carry on a tradition started by his grandfather and regime founder Kim Il Sung, almost invariably contain key messages hinting at the regime’s domestic and foreign policies for the year. In his address at a key party meeting last year, which was held in lieu of the 2020 address, Kim Jong-un announced Pyongyang would no longer respect a self-imposed moratorium on nuclear and intercontinental ballistic missiles (ICBM) and will unveil a new strategic weapon soon.

While there was no nuclear or long-range missile test this year, the North still displayed the latest additions to its arsenal — including a huge new ICBM — at a military parade in October.

Given the build-up to the eighth congress, the first party-wide event since 2016, Kim may instead opt to deliver a speech on that occasion instead of on New Year’s Day.

North's gearing up for military parade

North Korea nuclear complex may have been damaged by floods