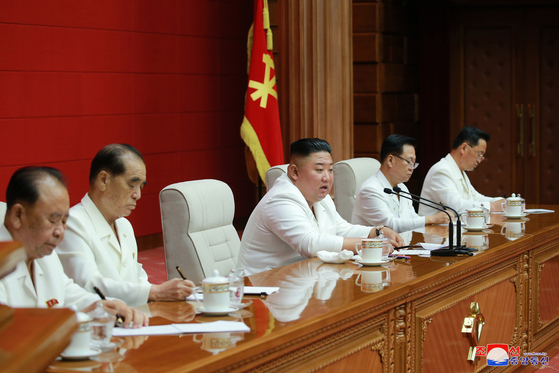 North Korean leader Kim Jong-un, center, speaks at a plenary meeting of the ruling Workers' Party Central Committee on Wednesday, during which he announced a new party congress to be held next January. [YONHAP]


North Korea officially admitted it failed to meet economic growth goals this year and announced that a new five-year economic blueprint will be ratified at a rare congress of its ruling Workers’ Party (WPK) next year.

The nearly unthinkable happened on Wednesday in Pyongyang, where the regime’s leader, Kim Jong-un, acknowledged before the entirety of the party’s Central Committee that the country had been unsuccessful in accomplishing the economic breakthroughs he promised in the last few years.

“[The] economy was not improved in the face of the sustaining severe internal and external situations and unexpected manifold challenges,” Kim said, reading a decision reached by the Central Committee, according to the English-language version released by the state-run Korean Central News Agency.

“[The] planned attainment of the goals for improving the national economy has been seriously delayed and the people's living standard not been improved remarkably,” he continued.

It was the first time the regime publicly recognized such shortcomings — coming directly from the mouth of its supreme leader, no less — since the disastrous third seven-year plan (1987 to 1993) failed to prevent a massive famine in the country that killed thousands in the late 1990s.

The memory of that historically hard period, known as the Arduous March, has arisen this year after an economy choked by international sanctions in place since 2018 saw foreign trade almost completely dry up after the coronavirus forced it to close its borders with China and Russia.

To make matters worse, the peninsula was battered by powerful rains earlier this month, causing immense damage to the North’s breadbasket provinces, on which it depends to feed its chronically malnourished population.

It was with such a backdrop that the regime abruptly announced a plenary meeting of its WPK Central Committee this week, which, according to state media on Thursday, ended with the determination that the current five-year plan in place since 2016 had effectively failed.

To “review in a comprehensive, three-dimensional and anatomical way the deviations and shortcomings” of that plan and inaugurate a new one to take its place, Kim announced Wednesday the WPK will hold its eighth congress in January 2021.

Party congresses — nominally the highest body of the WPK, according to its charter — are extremely rare events in North Korea, having only been convened seven times in its history.

The most recent, held in 2016 with over a hundred foreign journalists invited to cover the event, was used to announce the current five-year plan and avow continued development of the regime’s nuclear arsenal.

Kim Jong-un, who took over the regime after the death of his father in 2011, was also elevated at the congress to the position of WKP chairman.

That the North is planning to launch another congress so soon, considering the 36-year gap between the sixth and seventh congresses, testifies to how dire the economic situation in the country has become amid the Covid-19 pandemic and failure to reach a denuclearization settlement with the United States last year.

The English-language report on Wednesday’s plenary session from the state-run Korean Central News Agency did not elaborate further on the new five-year economic plan in gestation, though the language used to characterize the blueprint suggested it would not deviate from the self-reliance policies of the past.

One variable Pyongyang may be holding out for, however, is the outcome of the U.S. presidential election in November, in which incumbent Donald Trump faces a fierce challenge from Democratic candidate Joe Biden.

Though it made no secret about rooting for Trump when negotiations were still active, the president’s flat rejection of Kim’s demand for sanctions relief at their second summit at Hanoi, Vietnam, in February 2019 have soured the regime’s preference for his continued stay in power.

That was made abundantly clear last month, when Kim’s younger sister in a statement ruled out any summit with Washington this year, saying Pyongyang had to prepare to deal with Trump or a succeeding U.S. administration.

Analysts in South Korea said the regime was likely to calibrate its policies — as well as its stance on further nuclear negotiations — depending on the election’s victor, though respite from sanctions may be far off in any circumstance.

For now, the new congress may present a way for the regime’s leadership to shore up its social control amid the ensuing crisis. According to a party political bureau meeting from August, a new division within the party was to be launched soon tasked to safeguard “interests of the state” while “guaranteeing the political stability and order of the society.”

Surmounting economic difficulties may have added to Kim's stress and factored into a decision by the dictator to delegate some of his authority to younger sister Kim Yo-jong, according to a surprising briefing from South Korea's spy agency, the National Intelligence Service (NIS), on Thursday.

"State Affairs Chairman Kim Jong-un still wields absolute power, but he has passed on some of his authority compared to the past," Ha told reporters based on the briefing. "For example, First Vice Department Director Kim Yo-jong receives strategic briefings on South Korea and the United States before the information goes up to Kim Jong-un."

Ha stressed, however, this power structure did not mean Kim Yo-jong was anointed the dictator's successor, nor that she was the only one who had received delegated authority from Kim Jong-un. Party Vice Chairman Pak Pong-ju and newly appointed cabinet Premier Kim Tok-hun were given authority over the economy, while authority to oversee the regime's strategic weapons development was given to Ri Pyong-chol, a relative of Kim's wife and a rising power player in Pyongyang, the NIS said.