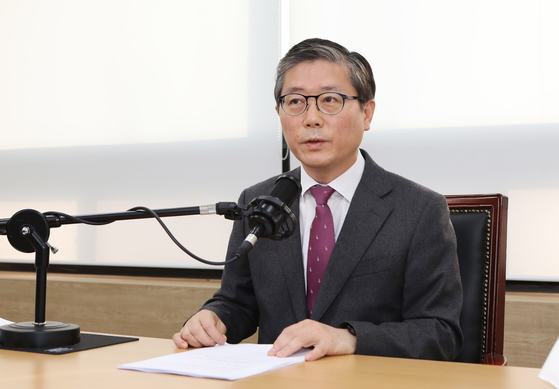 
President Moon Jae-in’s nominee for land minister on Monday issued an apology for making careless remarks in the past and vowed to act more sensibly as a senior public servant.

Byeon Chang-heum made the apology in a statement submitted to the National Assembly on the eve of his confirmation hearing, scheduled for Wednesday.

“From now on, I will think more prudently and act more seriously as a public servant nominee,” he said.

Moon nominated Byeon, president of Korea Land and Housing (LH), on Dec. 4 as his new minister of land, infrastructure and transport. But since the nomination, Byeon has been marred by a series of controversies for insensitive remarks made years ago.

Local media reported last week that Byeon had criticized a victim of an industrial accident when he was the president of Seoul Housing and Communities (SH). According to the minutes of a company meeting held in 2016, Byeon condemned the young maintenance worker killed at Guui Station in eastern Seoul after he got stuck between the screen door and an incoming train while repairing the door.

“If you look at this closely, it is an accidental death of an employee of a subcontracted maintenance company for Seoul Metro who got killed because of his own mistake,” Byeon was quoted as saying in the meeting. “It’s actually nothing. If the victim had paid just a little more attention, it would have not happened.”

Byeon said in his statement to the National Assembly on Monday that he was trying to stress the importance of safety management. “I still issue my sincere apology to the people hurt by my remarks, although it was not my intention,” he said.

His apology also addressed another controversial remark. According to the minutes of another meeting, Byeon spoke critically of an SH worker who proposed opening a cafeteria inside a public housing project.

“Poor people, unless they are crazy, eat at home. They don’t go out and pay for their meals,” Byeon reportedly said at the time.

“I apologize for troubling the people with my remarks,” he said. “If I take the post as the land minister, I will work hard to implement existing policies to improve housing stability for people without homes. I will also work hard to offer housing welfare programs that are satisfactory to the people.”

The main opposition People Power Party (PPP) said Moon must withdraw his nomination. The confirmation hearing is non-binding and the opposition has no power to stop the appointment.

“I could not believe what I heard when I was briefed about Byeon’s outrageous remarks,” Kim Chong-in, acting chairman of the PPP, said Monday.

“The new land minister is responsible for calming public outrage toward the failed housing policy of the administration, but the president picked someone who had uttered a malediction upon the people. We wonder why this man, not anyone else, has to serve this post.”

The ruling Democratic Party (DP), however, tried to defend Byeon. DP lawmakers said his remarks were politicized by the media and the opposition, and his character should not be a part of the confirmation hearing.

“If we look at his philosophy on housing issues and urban regeneration, he is a great candidate,” Rep. Lee Won-wook said in an interview with the Buddhist Broadcasting System on Monday.

Another DP lawmaker, Park Beom-kye, told the Christian Broadcasting System that Byeon had apologized for his remarks, and urged the lawmakers to scrutinize the nominee at the confirmation hearing on the basis of his professional abilities, not his character.