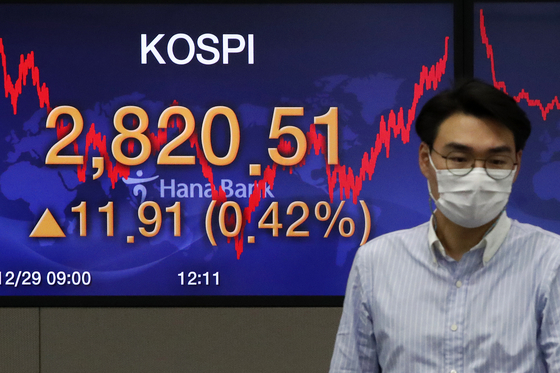 A screen in a dealing room in Hana Bank in Jung District, central Seoul, shows the final figure for the Kospi on Tuesday. [NEWS1]


Korean stocks finished at an all-time high on Tuesday, the annual ex-dividend day that is usually marked by choppy trading. The won rose against the dollar.

Trading volume was particularly high at about 1 billion shares worth some 19.1 trillion won ($17.5 billion), with gainers outnumbering losers 537 to 334.

The stock index got a boost from massive 2.2-trillion-won net buying by individuals, the largest daily purchase since Nov. 30. Foreigners sold a net 314 billion won, and institutions offloaded a net 2 trillion won.

In ex-dividend sessions, investors become eligible for year-end dividends even after offloading shares.

Investors were obliged to hold on to their shares until the previous session for year-end dividends. The final trading session of 2020 is Wednesday.

The local currency closed at 1,092.1 won per dollar, down 4.6 won from the previous session's close.