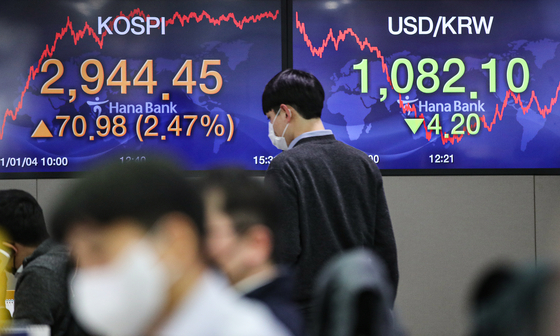 A screen at Hana Bank's dealing room in central Seoul shows the Kospi closing at 2,944.45, up 2.47 percent compared to the previous trading day, renewing its record high, on Monday. [YONHAP]


Korea’s stock market greeted the New Year exuberantly, with the Kospi passing well above the 2,900-mark to hit a new record high.

The high spirits came from retail investors who sought high-yield profits from stock trading as low interest rates have made bank savings unattractive.

“The Kospi is expected to continue rallying in the mid- to long-term,” said Lee Jae-sun, an analyst from Hana Financial Investment. “Exports are recovering, with major drivers being chips, cars and chemicals, and interest rates remain low and the dollar weak. Unless there is a sudden change in those conditions, the index is not likely to fall at the moment.”

As the index keeps skyrocketing, Samsung Securities on Monday revised its Kospi’s target band to 2,700 to 3,300 from its original target of between 2,100 and 2,850 projected two months ago.

Shinhan Financial Investment also revised its upper target band to 3,300 from 3,200 on Monday.

Major brokerages had predicted at the end of the year the Kospi’s top band would be around 3,000, but that target could be reached earlier than expected.

By sectors, chemicals, transportation and chips were strong.

Favorable expectations for chip exports pushed up prices of chipmakers.

A positive outlook on electric cars pushed up auto and battery shares as governments, including Seoul’s, announced carbon neutrality goals.

“In 2020, the Kospi closed with a 30.75 percent annual gain, which is the largest gain since 2009, when financial markets were recovering after the [2008 financial meltdown,]” said Lee Kyoung-min, a researcher from Daishin Securities. “Covid-19 and the speed of economic recovery remain uncertainties for the stock market, but the Kospi is showing solid growth.”

Retail investors were also large buyers for the tech-heavy index as they net bought 377.7 billion won worth of shares while institutional investors and foreign investors both offloaded shares.

The local currency closed at 1,082.1 won per dollar, up 4.2 won or 0.4 percent from previous session’s close. Korea’s won remained strong against the greenback for the fifth consecutive day.