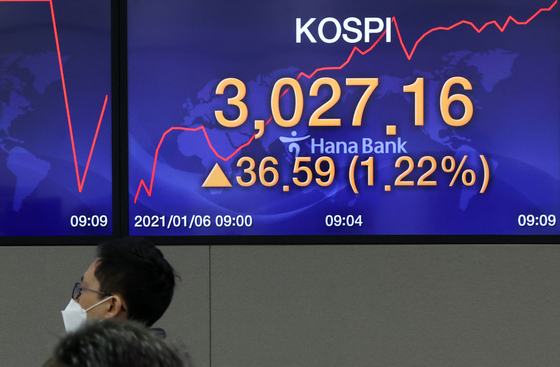 A screen at Hana Bank's dealing room in central Seoul shows the Kospi passing the 3,000-mark in intraday trading on Wednesday for the first time. [YONHAP]


Seoul's main bourse passed the 3,000-mark in intraday trading on Wednesday for the first time ever, bolstering expectations that a 3,000-era for the Kospi is on its way.

The benchmark Kospi rose to as high as 3,027.16 during trading after starting off strong in the morning.

The index, however, closed 0.75 percent or 22.36 points lower compared to the previous trading day at 2,968.21. Heavy selling by institutional and foreign investors towards the market's close ended a bullish rally over the last seven trading days.

Among the top 10 listed companies on the Kospi by market capitalization, chipmaker SK hynix and tech giant Kakao were the only gainers.

"It's better for the Kospi to calm down for a bit," said Lee Kyoung-min, an analyst from Daishin Securities in a report Wednesday. "[Investors] are becoming fatigued by overshooting of the index from the end of the year through early this year."

According to Lee, when the index soared for over nine weeks in a row in the past, like now, it ended up plunging without a period of calming down. If the market cooled down for a bit, though, the index soon entered another bullish phase.

Seo Sang-young, a research fellow at Kiwoom Securities, said the most important issue for the stock market this month is companies' earnings. Companies will be releasing the result of their 2020 fourth quarter earnings this month.

"If the companies manage to post higher-than-expected earnings, the [stock market] will sustain stable growth. However, if the results fall short of expectations, the market could become very volatile with investors offloading shares," Seo said.

"Because the index has been rising based on abundant liquidity from an unprecedented level of low interest rates, not based on fundamentals like corporate earnings, the index has a risk of falling, though I don't think there will be a plunge," said Lee Jeong-hwan, an economics and finance professor at Hanyang University.

So far, market expectations for earnings of major exporters in the country such as chipmakers Samsung Electronics and SK hynix as well as battery makers and carmakers are quite positive as exports in November and December grew robustly.

According to data from the Ministry of Trade, Industry and Energy, exports in December grew by 12.6 percent year-on-year to $51.4 billion, a record figure for December. In November, exports grew by 4.1 percent on year.

"People wonder whether the recent growth was a bubble, but I think we've just entered a different economic situation where interest rates are very low so we know where the liquidity is coming from," Prof. Lee said.