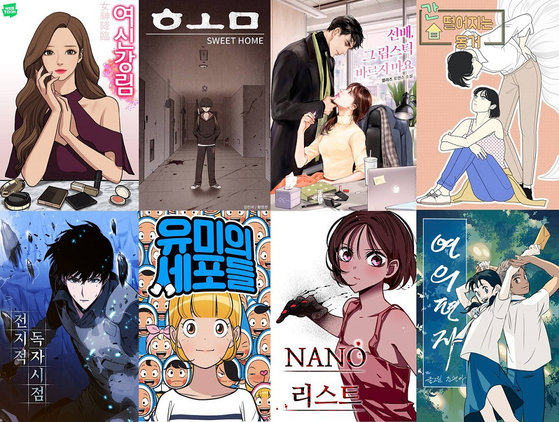 Images of Naver Webtoon's works that either have been or will be made into video-format content this year, including "True Beauty" (top left corner) and "Sweet Home" (top second from left). [NAVER WEBTOON]


Dramas based on webtoons and web novels saw the most successful year yet, a sign for web content platforms to roll out plans for more of the same for the coming year.

Naver Webtoon announced Dec. 28 its plans for turning its intellectual properties (IP) into video content, following the success of recent dramas such as the Netflix original series “Sweet Home” and tvN drama series “True Beauty.” “Sweet Home” was released on Netflix on Dec. 18, and “True Beauty” has been seeing a steady 3.3-percent viewership rating since it aired its first episode on Dec. 9.

In line for release this year are zombie webtoon “All Of Us Are Dead,” to be made into a Netflix original series, as well as film director Yeon Sang-ho’s webtoon series “The Hell,” romance comedy “Yumi’s Cells” and romance action “Nano List.” Web novel-based webtoons “The Remarried Empress” and “The Omniscient Reader” will also be turned into drama series, along with a dozen more.

Naver's rival Kakao Page also saw good outcomes this year with webtoon-based dramas. “Itaewon Class” peaked with a 16.5-percent viewership rating when it ran on JTBC from January to March this year, while “The Uncanny Counter” charted as the No. 1 trending video when it was released on Netflix on Dec. 16. Kakao Page announced its plans to turn 65 works into dramas, and to air 15 of them on Kakao TV during Licensing Con 2020 held last month.

“Webtoons are still underrated in a way,” said an official from Kakao Page. “But over 20 million readers log onto Daum Webtoon and Naver Webtoon every month. We want to find the space webtoons deserve as cultural content.”

According to a recent report by the Korea Creative Content Agency, the Korean webtoon industry continues to grow this year, especially thanks to increased digital content consumption amid the global coronavirus pandemic. Sales volume of the local webtoon market in 2019 was 640 billion won ($577 million), 173.7 billion won, or 37.3 percent higher than the previous year, and the readership of webtoons increased by 37.4 percent, in part due to the Covid-19 pandemic, with 63.4 percent of survey respondents saying they read webtoons at least once a week.

Having successful IP that can be expanded into other forms — referred to as OSMU (one source multi-use) content — significantly saves a company’s expenditure while also assuring profit, hence the reason why so many providers are eager to get their hands on such content, according to Kim Dong-wan, professor of webtoon story at Suseong University.

“Companies naturally seek out OSMU content, because a successful webtoon or web novel guarantees a certain level of popularity among consumers,” Kim said. “Nine out of 10 dramas and films fail to become a hit, so companies like to play it safe by developing something that has at least proven itself in some way. But this becomes formulated in a way and soon develops into a stigma.”

Culture critic Jeong Deok-hyun also pointed out that the current trend may lead to new problems, but also new possibilities.

“It’s possible that using ready-made content for video production could lead to decreased creativity and opportunities for scriptwriters or playwrights,” he said. “But OSMU content means that dramas could be made into webtoons or other content. It can be seen as a cross-genre business and lead to new synergy among the different fields.”