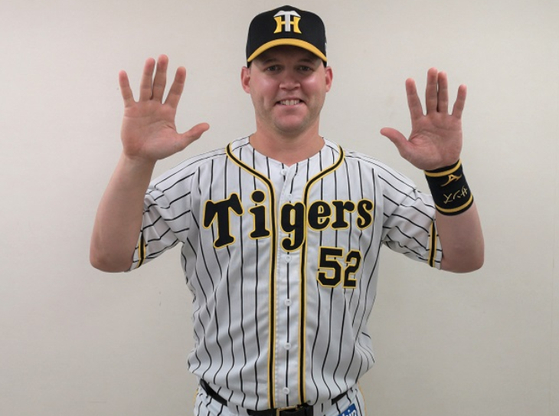 Sands joined the KBO halfway through the 2018 season and proved a great addition to the Heroes lineup as he finished his first season with a 0.314 batting average with 12 home runs in only 25 games.

In his second season he once again surpassed expectations, helping the Heroes advance all the way to the Korean Series by finishing the regular season with a 0.305 batting average with 28 home runs and 113 RBIs throughout 139 games.

After the Heroes finished runner-up in the 2019 Korean Series by losing to the Doosan Bears, Sands decided to expand his career by moving to the Nippon Professional Baseball (NPB) league, joining the Hanshin Tigers. After a few years of success in the KBO, foreign players often try to head back to the United States or move to Japan.

Although only a few see success, Sands was one of them. Despite the difficulties the NPB faced due to the Covid-19 pandemic this year, Sands played in 110 games for the Tigers and finished with a 0.257 batting average with 19 home runs and a 0.451 slugging percentage.

That performance was good enough for him to re-sign with the Tigers and in the upcoming season, 2021, Sands will not be alone as his former KBO rivals — pitcher Raul Alcantara and slugger Mel Rojas Jr. — will be joining the Tigers squad.

Sands may have left the KBO last year, but when the news broke the Tigers had claimed two more of the biggest players in Korean baseball, the former Kiwoom pitcher was back in the spotlight.

Below are edited excerpts of an email interview with Sands.


Q. Due to the coronavirus pandemic, everyone has had a hard time training this year. How did you prepare for the season?

A. It is a tough time for everyone. Luckily, I have a small home gym at my house, so I am able to do my weight training here at home. As it’s getting closer to the season and I am beginning to do more baseball activities, I am working out with the same academy I have the last couple years. I am trying to stay safe while working out with others.


Q. In the United States, not many people understand the different between Asian baseball leagues. What do you think the difference between the KBO and the NPB is?


A. Obviously there are really good players in both leagues. When the best of the best from Korea and Japan play, they are great competition to each other. The main difference in the leagues that I see is depth. I am not sure the reasoning, but the NPB just seems to have more good players on each team throughout the league.


Q. Would you say playing in Korea before heading to Japan helped you adjust more quickly to the NPB?

A. I definitely think the experience of the KBO helped me adjust more quickly in the NPB. Seeing the Asian style of pitching and how pitchers attacked me allowed me to have a head start when I got to Japan.


Q. In the NPB, foreign players also compete for limited spots on the roster. Is that something you’re often thinking about?

A. Yes and no. Obviously you look at how many foreigners are on the roster and realize that not everyone is going to be in the big leagues. For me, I feel like Hanshin knows what type of player I am, on and off the field, so if I come into this year prepared and play well then I shouldn’t have to worry … about my roster spot.


Q. Last season, you finished with 19 home runs and a 0.814 OPS. In terms of OPS, you were ranked first among the foreign players in the Central League. How satisfied are you about with your season and your numbers?

A. I was happy that I had a good enough season to re-sign for this year. I was not very satisfied with my season though. I felt like I played really well for a few months and then really struggled. I’m not sure of why I struggled so long, but I am working hard this off-season to make sure I can play well the whole year in 2021.


Q. You’ve re-signed with the Hanshin Tigers. Was that an easy decision to make?

A. Yes it was an easy decision. Hanshin is a great organization that have treated me and my family very well. After the season, we got into negotiations and they went very smoothly so it was easy for me to re-sign.


Q. Former KT Wiz player Mel Rojas Jr. also signed with the Hanshin Tigers. Were you involved in that process?

A. Yes I talked to Mel quite a bit during the signing process. I know how important it is to talk to someone who has experience with a team so I wanted to reach out to him and give him information. My wife also talked to his wife and I guess they liked what we had to say as well as the offer from Hanshin. I look forward to playing with him and hopefully being big parts of the lineup.


Q. Are you excited to play alongside another former KBO player? What kind of advice would you offer Rojas Jr. in terms of adjusting to the NPB?

A. I am excited. Like I mentioned I think we can be a big piece to the lineup. He obviously is coming off some great years in the KBO so hopefully he can keep it going over here. I will probably just talk to him about how pitchers attack me and how they may differ from the KBO. I think the more information I can give him, the quicker he will adjust.


Q. Are there any Kiwoom Heroes staff, coaches or players that you still keep in touch with? If so, would you ever encourage them to consider playing in the NPB?

A. I occasionally talk and text with some of the guys. If they wanted to try the NPB I would encourage them. Financially it may be a good choice for some and I think it is important for guys to experience other people, places and leagues if they are good enough.


Q. The Korean fans gave you the nickname “Morae Hyung,” which roughly translates as “sand brother.” How did you feel about the nickname?

A. I like it. The Korean fans were great to me and my family.


Q. Do you ever watch KBO games? If so, do you still root for the Heroes?

A. Yes. I watched many games this year and kept up with stats all year long.


Q. If you got the chance to play in the KBO again, would you be willing to return?

A. I would. My family and I really enjoyed our time in Korea. From the baseball, to exploring the country, to the fans we had a great experience and we would definitely do it again.


Q. Kim Ha-seong is heading to the major league and Lee Jung-hoo is also likely to head overseas soon. Is there any advice that you would like to give them?