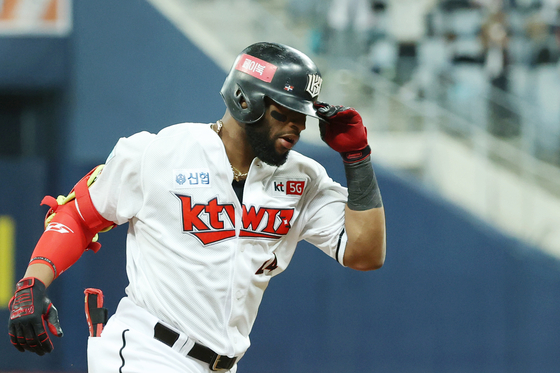 The KT Wiz's Mel Rojas Jr. rounds the bases after hitting a solo home run during a playoff game against the Doosan Bears at Gocheok Sky Dome in western Seoul on Nov. 10. [YONHAP]


Mel Rojas Jr. of the KT Wiz was named the 2020 KBO season MVP at the league award ceremony on Monday.


Rojas Jr., playing his fourth season in the league, dominated both the season and the MVP voting, picking up 653 points out of a possible 896 to finish ahead of NC Dinos catcher Yang Eui-ji in second and Doosan Bears pitcher Raul Alcantara in third.

“I’m glad to have received such a big award,” Rojas Jr. said. “It was only possible from the cheers of the fans and my family. It also wouldn’t have been possible to receive such an award without the coaches, the front office and my teammates. I think I was able to win MVP by working hard, and that led to a good result. I want to thank everyone for helping me. Although I couldn’t be at the awards, I want to thank everyone for encouraging me."

Rojas Jr. wasn’t able to appear at the awards ceremony as he had already headed back to the United States to spend time with his family.


Although the Wiz ended up finishing the regular season in second place and the postseason in third, the Suwon club dominated the awards ceremony, especially in batting. Rojas Jr. won an astounding four batting titles — home runs at 47, RBIs at 135, runs at 116 and slugging percentage at 0.680.

Rojas Jr. also ended the delayed season with a 0.349 batting average — coming in third, so narrowly missing out on a triple crown — after appearing in 142 games.

Rojas Jr.'s dominance at the plate helped lead the Wiz to their highest-ever regular season finish and first-ever postseason appearance.

“I’m very happy to have won four titles,” Rojas Jr. said through a video message during the KBO Awards ceremony. “I normally don’t care much about records, but I’ve won a number of titles. It was a tough season, due to the coronavirus, as I wasn’t able to [play in front of the] fans and to not have my family in Korea. But I’m really glad to have been able to help our team win by winning four titles [this season].”

Prior to the MVP announcement, the KBO’s Rookie of the Year was named.

Once gain, it was a Wiz player that took the honor. So Hyeong-jun won the once-in-a lifetime prize with 511 points out of a possible 560. By winning the award, he became the second Wiz player ever to be named Rookie of the Year.

Kang Baek-ho won the Wiz’s first-ever Rookie of the Year award back in 2018.

As a high school rookie, So picked up 13 wins and six losses throughout his 26 starts to finish his season with a 3.86 ERA.

So is the first high school rookie pitcher since Ryu Hyun-jin, now of the Toronto Blue Jays, to pick up double-digit wins. Back in 2006, Ryu picked up 18 wins, six losses and a save to finish his season with a 2.23 ERA as a high school rookie.

The Wiz added even more awards, with pitcher Ju Kwon winning the league’s holds title, at 31, and infielder Shim Woo-jun taking the stolen base prize, at 35.

This year’s stolen bases award really came down to two players this year: Shim and Park Hae-min of the Samsung Lions. Shim took the award in the end, stealing just one more base than Park.

In the other batting categories, KBO veteran Choi Hyoung-woo of the Kia Tigers won the batting title at 0.354 while Park Sok-min of the Dinos won the on-base percentage at 0.436 and José Miguel Fernandez of the Bears won hits at 199.

Over in the pitching award, the Kiwoom Heroes won two titles as Eric Jokisch won the ERA title at 2.14 and Cho Sang-woo took the saves titles at 33.

The Bears’ Raul Alcantara won two awards — wins at 20 and winning percentage at 0.909 — while the Lotte Giants’ Dan Straily topped the league in strikeouts at 205.