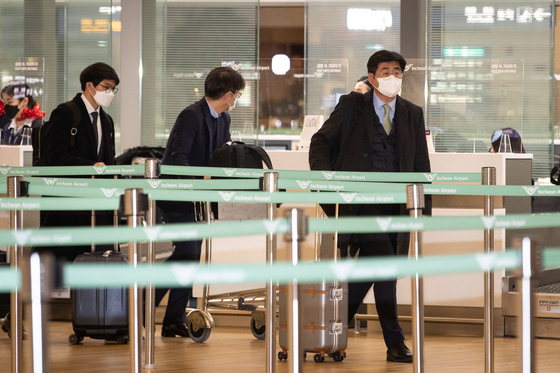 A government delegation led by Koh Kyung-sok, director-general of the Korean Foreign Ministry's Africa and Middle Eastern affairs bureau, departs for Tehran from the Incheon International Airport early Thursday to negotiate the release of the Korean oil tanker seized by Iranian authorities in the Persian Gulf earlier this week. [NEWS1]


Korea dispatched a delegation to Tehran Thursday to negotiate the release of the South Korean-flagged oil tanker seized by Iranian authorities earlier this week, days ahead of a separate visit by Seoul’s No. 2 diplomat to discuss the matter of Iran’s frozen assets.

The seizure of the Korean vessel and its 20 crew members in the Persian Gulf Monday reflects the complications of the two countries’ bilateral relations after the United States withdrew from the 2015 Iran nuclear deal, implementing sanctions that have locked some $7 billion of Iran’s assets in Korean banks.

The Korean government delegation, led by Koh Kyung-sok, director-general of the Foreign Ministry's Africa and Middle Eastern affairs bureau, departed from Incheon International Airport early Thursday and was set to arrive in Iran through Qatar.

First Vice Foreign Minister Choi Jong-kun will also depart for a three-day trip to Tehran Sunday, a visit that was arranged ahead of the ship's seizure to discuss how to handle Iran’s assets in Korean banks, among other bilateral issues. He is also expected to raise the ship's seizure with Iran.

Koh told reporters at the airport late Wednesday ahead of his departure that he plans to meet with his counterpart from Iran’s Foreign Ministry and officials who could help with the release of the ship.

A group of officials from the Korean Embassy in Iran met with one of the Korean crew members of the seized ship and confirmed the safety and health of all 20 sailors Wednesday, according to Seoul’s Foreign Ministry Thursday.

South Korean Ambassador to Iran Ryu Jeong-Hyun spoke separately with the Korean sailor afterwards, who confirmed that there had been no mistreatment by Iranian authorities during the seizure.

“The government is putting efforts into responding in a multifaceted manner through cooperation among all related sectors on the recent seizure of the Korean vessel,” said Choi Young-sam, spokesman of the Foreign Ministry, in a briefing Thursday. “The Foreign Ministry holds as our top priority to secure the early release of the vessel and its sailors.”

On Monday, Iran’s Islamic Revolutionary Guard Corps seized the oil tanker MT Hankuk Chemi, on its way to the United Arab Emirates from Saudi Arabia, in the Strait of Hormuz, a strategic waterway located between the Persian Gulf and the Gulf of Oman, alleging chemical and environmental pollution issues. The crew members aboard the ship, currently held in Iran's Bandar Abbas Port, include five South Koreans and Burmese, Indonesian and Vietnamese sailors.

The Busan-based operator of the vessel, DM Shipping, has denied accusations of environmental pollution, and Seoul’s Foreign Ministry asked Iranian authorities to provide evidence of the allegations.

The Iranian government has maintained that the seizure was a “technical issue,” going so far as to accuse Seoul of “holding $7 billion which belongs to us hostage.” Iran’s Foreign Ministry spokesman said ahead of Koh’s visit that there was no need for a Korean diplomatic delegation to make a separate visit just to discuss the ship.

A Korean Foreign Ministry official said on such remarks by the Iranian government spokesman, “What is important is that amid such remarks, our delegation departed after consultation with the Iranian side,” while he said it was “not appropriate” for him to speculate further on the intentions behind such remarks. However, he added that the Korean delegation "has considered many creative methods” for negotiations with Iran.

In May 2018, the Donald Trump administration withdrew from the Joint Comprehensive Plan of Action (Jcpoa) — signed in July 2015 by Iran, Britain, France, China, Russia, Germany and the United States — under which Tehran had agreed to curb its nuclear weapons program in exchange for a lifting of sanctions.

Iran has urged the release of assets worth some $7 billion held in two Korean banks — the Industrial Bank of Korea and Woori Bank — which have been frozen since September 2019, when U.S. sanctions waivers for Korea's imports of Iranian oil expired.

The Korean Foreign Ministry confirmed that the U.S. Treasury has already approved a special waiver to enable the frozen Iranian funds to be used to purchase Covid-19 vaccines through the Covax Facility. Iran was said to still be hesitant because of trust issues with the United States and uncertainty that it may consider any possible remittance into the United States as a sanctions violation.

A Seoul Foreign Ministry official said Thursday, “Iran has yet to agree because of trust issues with the United States, and the ultimate decision is up to Iran as to which route they will choose to purchase the Covid-19 vaccines.”

Iran also made a request to Korea for the frozen funds to purchase $1 billion worth of medical equipment, reported Yonhap News Agency Thursday, citing a diplomatic source. This comes in addition to Iran’s request to use the assets to purchase Covid-19 vaccines through Covax, a global mechanism for fair allocation of vaccines.

Spokesman Choi told reporters responding to a question about the report, “First Vice Foreign Minister Choi Jong-kun during his visit to Iran will not only be discussing financial issues but also hold comprehensive discussions on jointly expanding mutual exchanges including in public health.”

The Korean Foreign Ministry has a task force dedicated to humanitarian exchanges with Iran that holds regular working group meetings.